What We Learned: Guentzel shines, Penguins struggle with Rangers speed

Penguins – Rangers What We Learned

1. Rangers come at the Penguins in waves: The Penguins saw a Rangers team tonight with a personnel more suited to the group that was the President Trophy Winners in 2014-2015, than the slow out of sync team last spring that Pittsburgh overwhelmed.

In a game Pittsburgh jumped out to a 2-0 lead on goals from Jake Guentzel, New York would score five unanswered goals to secure the victory.

New York got their share of bounces, a JT Miller shorthanded marker late in the second to put the Rangers ahead 3-2 among them but the latter half of the game, New York was the team getting pucks on net and with traffic.

As this game progressed, the Rangers were able to play to their new found strength of being able to skate past the Penguins and the increased speed in the bottom-6 saw a game play out where Pittsburgh was the team forced to shorten the bench with their slower forwards taking a seat.

“They’ve [Rangers] added some speed to their game that’s helped their transition game,” Mike Sullivan said of a change between now and last spring.

2. Penguins struggle to break Rangers Trap: When the Rangers got ahead 3-2, they went immediately into a trapping style. On a lot of occasions, teams sitting back against Pittsburgh, especially when the Penguins are trailing is playing with fire.

However, with the Penguins stars unable to dictate the play, New York was stout defensively in limiting the Penguins to just two shots on goal through the first 14 minutes of the third.

The Rangers 4th goal of the game off a Brian Dumoulin turnover in trying to break the Rangers trap with a stretch pass, was a good example of where New York being a quicker team gave Pittsburgh problems to get through the neutral zone and allowed New York to be aggressive.

Ryan McDonagh is able to step up because he reads the weak side winger is skating stride for stride with a stretching Bryan Rust.

McDonagh creates the turnover then the Rangers crash the net for the goal.

3. Jake Guentzel Shines: Jake Guentzel’s debut could not have been scripted better. Scores on his first shift/first shot, then follows it up with his second goal of the game on his third shot at 13:12 of the first period.

In his first six minutes of ice time in the first period, Guentzel had 2 goals, 4 shots on goal, and created 5 individual scoring chances.

What continues to be most impressive about Guentzel is the hockey IQ/instincts in how he reads the play before it develops.

The skilled presence of Guentzel also looked to open things up for Evgeni Malkin in the middle of the ice in the first part of the game.

“He was probably best player tonight,” Malkin said. “He’s smart player. He understands how we play.”

Where Guentzel had some trouble as the game progressed was handling the puck on the wall on his strong side which shouldn’t be surprising as he’s a natural center. Had a turnover off the wall leading to a high danger chance for the Rangers early in the third.

Guentzel and Matt Cullen led the Penguins with 4 shots in 5 v 5 situations.

— Marc Andre Fleury made 31 saves on 35 shots in the loss. He got an unlucky bounce on the Rangers third goal, while New York’s first goal was a defensive breakdown by the Penguins. The fourth goal is up for debate. 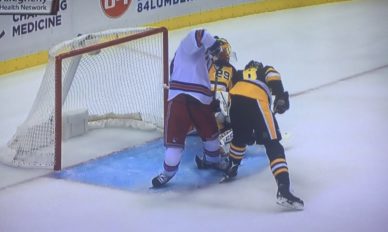 Kevin’s Hayes goal to put the Rangers up 4-2 was a goal where the Rangers got a good bounce by driving to the net, though, what the tape shows is Fleury was off his angle and hugging the left post too much when McDonagh was in a pure pass situation as he was opening up to pass and Justin Schultz was there with pressure.

What is certain is that Michael Grabner’s second period goal to tie the game at 2-2 was one squarely on Fleury.

Fleury didn’t handle a fanned shot that leads to him getting out of position and never recovers. That was a big momentum changing goal Pittsburgh gave up where the Penguins also had four players on the strong side of the puck and pretty much puck watching in not covering the weak side as Tom Kuhnhackl never takes his man. [hide] The Penguins never got the game back from there.

— Sidney Crosby had his least impactful game of the season and his turnover on the power play led to JT Miller’s shorthanded goal that stood as the game winner.

Crosby finished with 2 shots, 46 SAF%, and a minus-4 in the loss. The coaches noticed too and tried to shake things up in the third as Crosby centered Matt Cullen and Bryan Rust for much of the period.

Getting Matt Cullen more situations to play with skilled players needs to be a priority for short stretches in games.

— Tonight was the 10th time in 20 games the Rangers scored at least five goals. [hide][/hide]

What I learned is William Depaoli runs a shitty website.

What the fuckk is this. Because it’s sure as shitt not English. Imagine how bad his keyboard smells.

Why is this site broken again. Wish D hires back npl so he can fix his site. Greedy bastard forced npl to protest 15$ minimum wage

Full vacation mode is a point per game? If that’s vacation mode, Sid wasn’t even conscious until December last year. No part of what you just said makes any sense.

Sid was braiding sam’s back hair for the first three months. Everyone knows that.

I give same credit for coming down hard on letang. Despite them nothing thinking a shower head in their enemy. Should have shipped him out 2-3 years ago. Hell. Just to make the locker room smell better.

maybe your russian does that with his Vodka Breath

Maybe. But that doesn’t compare to your French BO sam

Yep, it really caught up to them last year when they won the cup, dumbass. Remember same said Kessel was a fraud, then he led the team in playoff points and we won the cup? Classic dumb same.

you clown kessel was in vacation mode last year during season doan had more goals then him
once playoff started teams were focused on Crosby more while Chubby was getting his success from the back door while he plays on 3rd line vs 3rd D pairings .so wouldnt suprised if that happended again if pens make the playoffs Now go choke on a 169$ hotdog you fat slob

I think it’s weird you call other people “chubby” given the fact that you have more chins than a Chinese phone book. It’s like Danny DeVito saying someone is short.

So wait, now your suggesting that they should have traded Sid 2-3 years ago? He was clearly the only fraud on the ice last night so I can’t imagine who else you would be talking about. I guess it could have been Fleury since he wasn’t good last night either and was here 2-3 years ago.

One game winner assist. That’s all that needs to be said. At least he showers though.

The only person infatuated with Malkin, DB, Orpik and TK is you. Your so heartbroken that 3 years later you still can’t get over them.

MAF should have been traded after the Buffalo game; Oli looks so s-l-o-w.

matt murray plays, the pens win tonight. the patron saint can play good against buffalo, but he was a turd against the caps and the rangers. this loss is on sullivan for having murray back up. it’s a joke.

They don’t want Murray exposed against good teams. They had him fake an injury vs wash and sat him against the rangers. He’s trade bait.

Letang probably plays like at least and AHL player (still smells though) and dumo doesn’t cough that puck up with Murray in goal. Pure unfiltered yoda!

Yes. And he owns a bottle of shampoo. Which is a nice feature.

look at the GAA. pens need 4 to win when st.bleury plays and 2 to win when murray plays. they are on the same team….can’t you see the trend?

Does Crosby get a game winner assist on the Miller goal?

DePaoli, to educate your followers, rewind the second goal and show why Fleury was out of position. He muffed an easy opportunity to freeze the puck despite knowing his five guys were tired after an icing.