Post-Practice Buzz: Decision on Morrow doesn’t have to be made until Wednesday 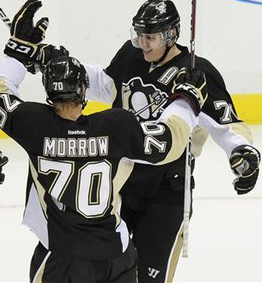 Cutdown Buzz
Among the intriguing storylines for the Penguins going into their final cuts early next week is 1st rounder Joe Morrow who again today was used in a top pairing role with defenseman Kris Letang.
What has been so impressive with Morrow is how consistent he’s been throughout camp from practices to games. For young players, they show flashes but can rarely keep up the consistency. Morrow has been able to do it and the Penguins brass is said to have been extremely impressed with his play Tuesday night as the team got a good look at him against an NHL caliber lineup with Kings dressing several regulars.
Already signed to a three year entry deal this past summer, Morrow does not fall into the Tuesday deadline for teams to either sign junior eligible players or send them back to juniors.
Therefore, a decision on Morrow doesn’t have to made until Wednesday when all team’s must have their rosters down to 23 by 3:00 p.m. Morrow’s NHL clock doesn’t start until after nine NHL games.
Morrow has a $832,500 NHL base salary in the first year of his deal with a $925,000 cap hit.
Whether Morrow makes the opening night roster is believed to be dictated by Brooks Orpik’s availability for the first couple weeks of the season.
“In terms of Joe Morrow, he’s played very well, ” head coach Dan Bylsma said today. “I think we’ve seen a lot of good things from him in camp and he probably continues to get another opportunity because of the fact that we have defensemen that are not in the lineup right now.”
He’s getting an opportunity because of his play and because of what he’s done on the ice.”
The Penguins remain unsure on where Brooks Orpik will be a week from now.
Practice Notes
*Joe Vitale who’s eligible for waivers, has outperformed Richard Park at the center position by a wide margin and the Penguins might be taking notice. Park played wing in Tuesday’s preseason game against the Kings and was back on the wing again for today’s practice, skating on the left side for the most part with Vitale at center and Craig Adams at right wing.
*Steve Sullivan (groin) has put together a couple solid practices this week but head coach Dan Bylsma wouldn’t commit to Sullivan playing tomorrow night vs the Chicago Blackhawks. He has sat out all four preseason games so far.
Sullivan skated on the top line with Evgeni Malkin and James Neal. It has been a big disappointment that Sullivan has not been able to develop any kind of chemistry with Malkin during the preseason.
*Sources say the Penguins have not been pleased with Mark Letestu’s play in camp. Letestu centered Steve MacIntyre and Arron Asham in today’s skate.
*Sidney Crosby had elevated line duty today, centering Pascal Dupuis and Matt Cooke on the third line. Crosby who was wearing a white helmet again which means no contact, was getting bumped few times during first part of practice but nothing different from previous practices. He has not been cleared for contact, despite speculation that may be out there.
Today’s Lines
1. Sullivan – Malkin – Neal
2. Kunitz – Staal – Kennedy
3. Cooke – Crosby – Dupuis
4. Park – Vitale – Adams
5. MacIntyre – Letestu – Asham.
*The Penguins top-3 pairings today were:
Morrow – Letang
Martin – Michalek
Niskanen – Engelland
Brian Strait and Ben Lovejoy worked as the 4th pairing.
Did Not Practice: Jason Williams (groin), Alex Picard (hand), Dustin Jeffrey (knee), Brooks Orpik (Abdomen).