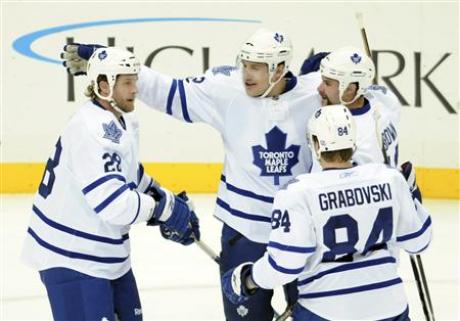 The Pittsburgh Penguins woes at home continued Wednesday night, losing to the Toronto Maple Leafs 4-3 at the Consol Energy Center.
Clarke MacArthur scored twice and Toronto’s Jonas Gustavsson turned aside 22 shots in his first start of the season to lead Toronto to a 4-3 victory.
Toronto jumped out of the gates with a quick start and Colton Orr scored on a redirect in front just 5:18 in the period to give Toronto a 1-0 lead.
Pittsburgh responded with two 1st period goals as Chris Kunitz scored a power play goal at the 11:27 of the 1st and Max Talbot notched his 1st goal of the year late in the period to give Pittsburgh a 2-1 lead after 20 minutes.
Pittsburgh though was unable to build momentum off of Talbot’s goal and Toronto scored 3 2nd period goals in the first 10:33 of the period to jump out to a commanding 4-2 lead.
Sidney Crosby scored late in the second, his first of the year to get the Penguins back within one goal but Gustavsson and the Leafs closed the door in the third period, securing the 4-3 win.
In the second period, Toronto scored 3 goals on 5 second period shots and only managed 2 shots in the third period. It was yet another frustrating loss for the Penguins.
The Penguins fell to 0-3 at the Consol Energy Center and have lost three of four games to open the season. All three losses this season have had the same feel; Missed opportunities in the offensive zone, defensive zone breakdowns and inability to make big saves.
Playing without two of their top defensemen in Zbynek Michalek and Brooks Orpik, Pittsburgh limited Toronto to just 14 shots on goal but Toronto found a way to get on the board four times.
Pittsburgh struggled to clear the front of the net and were only 46% on face-offs. Inability to win D-zone face-offs has plagued the Penguins this season. On Toronto’s third goal, Crosby was beat cleanly off the draw and Toronto scored just seconds later.
Defensive zone “mistakes” and breakdowns were common words heard out of the locker room last night as players are not putting the blame on Marc Andre Fleury who made 10 saves in the loss.
Fleury who is taking a lot of heat from the fans, “mock cheers” were heard in the arena during the 2nd period when he made one of his two routine saves in the second.
All four goals were not Fleury’s fault but two of them he should have had was Colton Orr’s 1st period tally and Clark MacArthur’s power play goal at the 3:33 mark in the 2nd period.
Offensively, Pittsburgh registered 25 shots on goal and again failed to capitalize on prime scoring chances.
One situation that stands out to me was late in the second period and Pittsburgh came in on a 3-on-2 — Kunitz came down the left side dropped the puck to Crosby who faked a shot and drew both defensemen to his side and found Dupuis wide open for a one timer in front of the net and Gustavsson slid over to make a beautiful left pad stop as Dupuis was unable to get the puck up.
Those are plays the Penguins have to capitalize on but with a lack of goal scorers upfront, those issues are not going to go away.
Despite the D-zone breakdowns, Pittsburgh still did some good things by limiting a team to just 7 combined shots in the final two periods.
Andrew Hutchinson stepped in and was effective in the transition game. However, he’s not strong in the defensive zone which is why he’s failed to become a regular in the NHL. He was a minus-2 in the game.
Deryk Engelland continues to show he’s one of the most under-rated tough guys in the game. He pummelled Colton Orr with a blow to the face and Orr went down and never returned.
Notes: Pittsburgh practices today at 11:00 a.m. We will have updates shortly