Pre-game notebook: McKee non-committal on whether he will be in the lineup 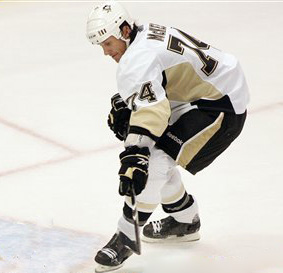 *Pre-game Notebook: Is Bylsma leaning towards McKee?; Staal gets 1st unit power play time in morning skate?
A lot of the buzz this morning at the morning skate centered around defenseman Jay McKee and whether he will get back in the lineup.
McKee was hounded by the media after the skate and was non-comittal on whether he was told that he will be back in the lineup.
McKee is clearly ready to get back in the lineup and made some hints that he might be.
However, In the morning skate, McKee was the 7th defenseman as the Penguins did not alter their pairs. Team sources are calling a switch unlikely but McKee will participate in warmups and McKee replacing Jordan Leopold can’t be ruled out just yet.
There are doubts that Pittsburgh will take Goligoski’s offensive abilities out of the lineup.
*The Penguins again worked on their power play and used two different power play formations. Jordan Staal saw time with what can be described as the second 1st unit which included Evgeni Malkin getting reps at the point. Alex Goligoski did not take any reps with the No. 1 unit.
1st unit: Guerin – Crosby – Malkin
Letang – Gonchar
Staal – Crosby – Guerin
Gonchar – Malkin
*The Penguins worked both units against 5-on-4 situations