Preseason Game No. 2: Spotlighting the key areas tonight that show Jake Guentzel is close to being NHL ready 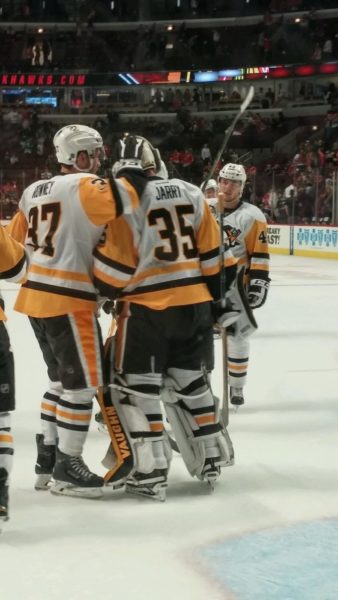 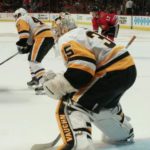 The spotlight is on Tristan Jarry a bit more with Matt Murray’s recovery time up in the air. He made the most of his opportunity with a 30 save shutout in showing a lot of the ability that made him a second round pick in 2013.

In the first period Jarry was peppered with 11 shots. Jarry was tracking the puck really well and his rebound control improved in periods two and three as the game went on.

Jarry made a great stop on the PK late in the game.

One area Jarry was susceptible to getting beat last season in the AHL was going down too early on shots to his glove side. Saw some examples of that tonight where the Hawks didn’t get the puck up enough, but overall hard to nitpick much from Jarry’s performance, even if few NHLers were dressed.

– David Warsofsky had a terrible corsi night, 33% at even strength 7 SAF/14 SAA, but his ability to move the puck up with poise and establish zone entries is why this coaching staff really likes him, showed a lot of that tonight, and Warsofsky can’t be ruled out as a  candidate for the 7th defenseman spot.

There’s been some buzz around Carter Rowney in camp. Very good size and is an okay enough skater where he could emerge as a callup option. He had some good moments and was very strong on the forecheck. Playing with Jake Guentzel who was the best player on the ice, Rowney was on the ice for 20 shot attempts at the even strength. The Penguins had 41 total 5 v 5……His advanced stats might have been poor but J.S. Dea stood out at times on the wing.

Jake Guentzel has been player I’ve talked about since the summer that the organization was really excited about, some viewing him as the top forward prospect in the Penguins system.

Through the first couple days of camp, Guentzel has showed signs he is close to being NHL ready but how close was a question that was somewhat going to be answered this preseason.

Tonight’s game gave a very good glimpse of how close he is and it has everything to do with the hockey sense and little things he does extremely well.

While nothing resulted with a puck going in the net, Guentzel took this game over in the second period. Pittsburgh out-shot Chicago 23-7 in the period and had 12 scoring chances. Guentzel’s line created eight of them.

One of the knocks on Guentzel is that he likely needs a year in the minors to get stronger. There wasn’t a more effective player at winning puck races and puck battles tonight.

Guentzel was a force in creating puck possession, on the ice for 21 shot attempts, 7 against at even strength (32/11 all situations).

Here were five sequences in the second period during about a 10 minute stretch where Guentzel excels at in key areas that show how much of a complete player he is and one this coaching staff will trust on the ice.

2. Guentzel wins a puck race, gets the puck to Dominik Simon (who also had strong game) & leads to scoring chance.

3. Yet another play where Guentzel using his speed and taking a perfect angle on the forecheck leads to a high danger scoring chance.

4. Guentzel beats two men up high, gets puck past third defender to Simon in front for a chance.

5. Here was a chance late in the period where Guentzel beats defender wide to setup a great chance in front.[/hide]

Zero, how about the 5 minute power play Sestito drew after hitting himself in the face with the other guy’s stick. That’s the type of team-first commitment Tommy gives every night. #umbrance

You got me there… if he can draw a 5 min major nightly then he isn’t completely useless. Please now, go on and tell me how much more committed to the team he is vs the guys that can actually play the game!

Oh, I thought it was a 5 minute infraction. You’re right, he sucks. He’s perfect for the pre-season (and meaningless regular season games).

I agree, so let’s not have this debate in October through April like it seems to come up in each of the previous years!

Man, Jarry’s shutout though – could he be…. #SomethingSpecial?

Stanch, the only difference between Jarry and your boy Fleury is Fleury sucks. Seriously, Fleury would have put forth the same great effort only to give up a puke goal when the game was hanging in the balance. #goaliesmatterlikepowerplays

talking about puke where is that Puke Npl ?
that Pokemon go game really made him disappear from this site
this site needs him so he can help Stain to give thumbs down to everyone

Guentzel must have really picked it up in the 2nd & 3rd period, only got to watch the 1st and I was very disappointed because he was invisible. Dea really stood out in the limited time I got to watch but didn’t really see anything in the small sample I saw to suggest any of the young guys were close to NHL ready, well except for Smaltz & Motte but they both play for Chicago.

i didn’t watch much of the game, but there was a shift or two in the second where guentzel looked like bugs bunny playing every position on the ice. he was everywhere.

bugs. there was a baseball game where bugs bunny played all 9 positions at once against the gas house guerillas. bugs won. tremendous athlete. what a competitor.

Jake Guentzel has been player.

Got any more gifs?