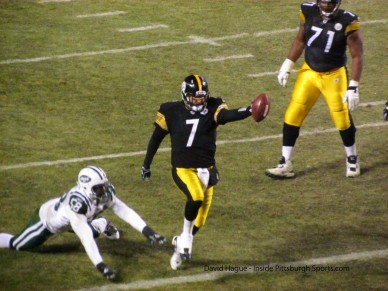 Ben Roethlisberger said all the right things a few weeks ago in that he’ll do whatever the Steelers need him to do to make the cap work. More likely than not, it just Ben talking to look good.

But, restructuring and kicking it down the road isn’t Ben Roethlisberger being a company man and taking a pay cut.

Not one word has come out of the agents mouth that Ben taking anything less than the $19 million Ben is owed in 2021 is going to happen. Everything the agent said was “RESTRUCTURE”, yet, many took the comments as Ben being willing to take a paycut.

In a reversal from a couple weeks ago, though, the Steelers have gone from being all-in on another run with Ben Roethlisberger to taking on the $22 million dead cap hit (release) now being a strong consideration.

“He reiterated to us that he wants to continue to play,” Colbert said during a video conference call with reporters on Tuesday. “We told him, quite frankly, that we have to look at the current situation.”

Is it all nothing more than the Steelers taking a couple weeks to thoroughly evaluate the season and coming out of it that going all-in on Ben Roethlisberger for another season is 100% the right move? And we’re not just talking on-field production.

What made the Colbert media session so newsworthy wasn’t just being non-committal on Big Ben, it was his tone and other things like talking about the need to reevaluate the type of quarterbacks, running backs, receivers they bring in to tailor to Matt Canada’s style of offense. It’s no secret that if Big Ben returns, he will be driving the bus on how this offense is ran.

Colbert at the end of the day just sounded everything of a GM who is intrigued by starting the process of life after Ben Roethisliberger right now instead of the 2022 season and was setting the stage publicly in the event of a possible divorce between the two sides this off-season. It just seemed a little more than Colbert publicly trying to apply pressure to Ben that the team isn’t interested in doing a kick it down the road deal and he’s going to have to take a paycut from the $19 million in salary he’s owed.

So what is at played here?

There were whispers prior to Colbert’s media session that Pittsburgh has quietly been a sleeper team monitoring the To read this insider news, subscribe to get “Inside Access”!

To make Ben better we need a running back Najee Harris from Alabama. We passed on Dobbins who pushed Ingram out of Baltimore, we passed on free agent Leonard Fournette (e was terrific in the super bowl) we better find a way to get Harris from Bama ,,he is a beast.

Look if Ben wants to play he needs to redo his deal to make it cap friendly. We are still beter off with Ben than Mason or that slug Haskins he is awful..

What we need for the love of god is a running back. We have been 30th like three years in a row. James Connor isnt the answer sorry..injures inconsistent and unproductive.