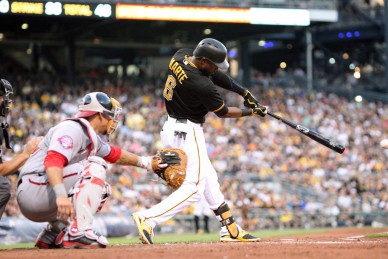 Did the Pirates jump the gun in extending Clint Hurdle this month?

As the Pirates organization has tried to sugar coat this season that the record you see isn’t an accurate picture of what this team really is, the Pirates are what their record says it is.

A 68-84 ball club that is climbing closer to the cellar of the NL Central with a seventh straight loss Tuesday night to the Milwaukee Brewers.

The Brewers who no one saw coming as a legitimate playoff contender in 2017, have moved 1.5 games back of the Colorado Rockies for the second wildcard.

Bob Nutting awarding four year extensions to Clint Hurdle and Neal Huntington this month can be looked at on one end as Nutting sticking with his guys who got this organization to three straight playoff appearances.

Bringing them back to lengthy extensions also makes them punching bags for what’s heading to be another rebuild.

Bob Nutting is always calculated and knows what he’s doing.

Neal Huntington was always going to return. That much was a 100% certainty.

Clint Hurdle was also likely to get an extension as he did but his fate was a bit more contentious. Even a couple weeks prior to the Hurdle extension in early September, those close to the situation say Hurdle heard the Tom Prince rumblings that others have and wondered about his future in Pittsburgh.

Behind the scenes he’s a great ambassador for honing in corporate sponsors, sources say, as the Pirates value the charismatic ability of Hurdle to drive in that crucial area for the franchise.

What the Pirates, though, failed to properly do in making such a long-term commitment to the 60 year old Hurdle, was answer the most pressing question that has been so crushing to this franchise the last two seasons:

Why have the Pirates most talented players regressed, significantly in some cases, under Hurdle’s watch and why has he been unable to light a fire under these particular players who lack accountability some nights?

From Andrew McCutchen, to Gregory Polanco, to Starling Marte, it’s not just one or two players that have taken major steps back in the prime of their careers since the end of the 2015 season.

Arguments were there for the Pirates to bring back or move on from Hurdle.

The cloud hovering around this team is whether Hurdle’s the guy to get the likes of Marte and Polanco to play up to their ability on a daily basis.

This season and much of last, he hasn’t been that guy to do it.

Will anything really change in that department for the 2018 season?

Stopped following the Pirates in 1993.

Benny – you ready for Buctober?!