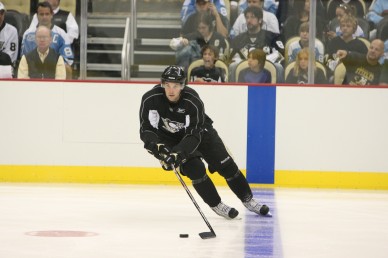 The Pittsburgh Penguins reduced their roster to 32 with the demotions of 6 players to Wilkes Barre/Scranton and returning 2nd round pick Scott Harrington to juniors.
There were no surprises among the group as Eric Tangradi and Nick Johnson headline the players who were demoted today to Wilkes Barre. The others are forwards Ryan Craig, Colin McDonald and goaltenders Scott Munroe, Brad Thiessen. Craig, McDonald, Munroe and Johnson all have to clear waivers by noon on Thursday, according to the Penguins.
The roster now stands at 32 players (18 forwards, 12 defensemen and 2 goaltenders).
Due to the Penguins not being permitted to send down injured players, they still have to carry the likes of Robert Bortuzzo and Boris Valabik on their active camp roster.
Roster Breakdown and Buzz
With the Bortuzzo and Valabik injuries, In reality there are three cuts to make on the blueline and maybe just two as Brooks Orpik could begin season on injured reserve.
Paul Martin, Kris Letang, Brooks Orpik, Zbynek Michalek, Deryk Engelland, Ben Lovejoy, Matt Niskanen, Brian Strait, Joe Morrow and Alex Picard are the top-10 at this point. (11. Boris Valabik and 12. Robert Bortuzzo not participating in camp)
Morrow, the team’s 1st round pick had another strong game in Kansas City.
Brian Strait will play Friday night against the Hawks as he’s emerged as a top candidate to be on the opening night roster if Orpik goes on IR.
Alex Picard has been nursing a hand injury and has not skated all week. The team is off today.
Meanwhile, Dustin Jeffrey and Sidney Crosby have not yet been cleared for game action and will probably begin season on injured reserve.
Under that scenario, it would leave the Penguins to make two to three cuts at the forward position.
Forwards (15): James Neal, Evgeni Malkin, Steve Sullivan, Chris Kunitz, Jordan Staal, Tyler Kennedy, Matt Cooke, Mark Letestu, Pascal Dupuis, Arron Asham, Craig Adams, Joe Vitale, Richard Park, Steve MacIntyre, Jason Williams.
(3) Sidney Crosby and Dustin Jeffrey not yet cleared for contact. Prospect Nick Petersen is injured and can’t be sent down until he’s healthy.
All forwards would have to clear waivers, except for Petersen