Rumors: White Sox trying to get the Pirates back to the table?

Are the Pittsburgh Pirates still in on Jose Quintana or out? 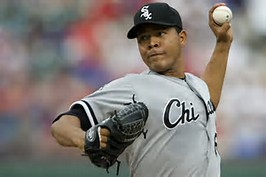 It depends who you want to believe.

The Pirates who are said to have dropped out of the mix for Quintana in February, continue to play the card publicly and privately that the cost to acquire Quintana does not fit with their beliefs.

Meanwhile, talk outside of Pittsburgh is the White Sox have checked back in with Pittsburgh this spring to see if there’s been any change on their thinking and the Pirates have at least engaged with the White Sox again about a proposal centering around Tyler Glasnow as the lone high tier prospect they’d be willing to move, which is not enough to get it done. The White Sox have scouted the Pirates heavily this spring, along with the Astros, Braves.

The Pirates remain steadfast to the White Sox and anyone around the league who will listen that Austin Meadows, Mitch Keller are completely off limits along with Josh Bell.

Huntington gave a long range answer on Quintana in an interview with MLB.com this week and the Pirates will continue to hold firm on not moving multiple high-end prospects for an immediate need.

Question from MLB.com: You recently said the asking price for Jose Quintana was too high. Some GMs have no problem trading top prospects — [Dave] Dombrowski did it with the Chris Sale trade this winter — while others prefer not to. What are the factors that go into such decisions for you? Do you think market size comes into play?

Neal Huntington answer: “It has to, unfortunately. We recognize that there are teams that believe in windows; “We have a window now, and we’ll pour all of our resources into winning this year or next year or the next two years.” We’re not one of those that subscribe to that theory. Our belief is that we give ourselves a better chance to win the World Series by getting to the postseason as consistently and frequently as possible, and the way we do that is to have a really good team as frequently and consistently as possible.

“In these markets, where the large-dollar free-agent signs are not available to us, how do we make sure we have a large number of really good players? It comes through the international market, it comes through the amateur Draft, and it also comes through shrewd trades of younger players maybe before they’re established and an occasional waiver claim that turns into a regular or turns into a reliever. For us to have access to the elite talent — which is what the best teams have — we have to develop most of that internally.

“If you trade two, three or four of those players, and even if only two of them turn out and the other two turn out to be mediocre or underachievers, you’ve still traded two players off your club that have a chance to be good for years to come. You can look around our entire club right how and anybody that came through our system, we could have traded somewhere along the way. Gerrit Cole, Jameson Taillon, Gregory Polanco, Starling Marte, Jordy Mercer, Josh Harrison, Josh Bell, Tony Watson; we could have traded any and of all of them at some point, and every single player we would have acquired wouldn’t be with the Pittsburgh Pirates anymore. They would have left for somewhere else because of free agency. That’s where it becomes hard. Our goal is to be a consistent, quality championship-caliber team that’s playing meaningful games in September and playoff games in October. In order to do that, we need to have a lot of really good players. The prospect hit rate isn’t perfect; we’re trying to make it better. We will trade prospects, it just has to be the right opportunity, the right situation and the right return.”[/hide]

BN and NH lie, so why quote them??

Dont necessarily agree, but its not something to pound your fist over. That said, you still have Cutch. Marte in his prime. Polanco entering his prime. Bell potentially becoming an impact player, along with the rest of the infield providing above replacement results. That offense with a rotation that starts with Cole, Taillon and Quintana at the top would seem to ensure a highly competitive team for the next 3 plus years. Without Quintana, this club needs one more top rotation starter to legitimately compete for the division and win in the playoffs. If they think Glasnow can be that… Read more »