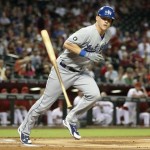 The Pirates are working on finalizing a deal with the Boston Red Sox that will have three to four players coming their way in exchange for Joel Hanrahan. One player rumored to be a part of the deal is power hitting OF Jerry Sands who was traded from LA to Boston in the Dodgers-Redsox blockbuster trade this past summer.
The 6-foot-4, 225 outfielder is regarded as being MLB ready for 2013 and here’s some buzz on him:
Sands, 25, is regarded as having great power, but has a loop in his swing and strikeouts often.
In 2010, Sands hit 35 home runs and 93 RBIs with a .301 average between Single-A and Double-A ball. In 2011, Sands belted 29 homers with 88 RBIs, batting .278 in Triple-A Albuquerque. In 2012, Sands appeared in 119 games with the Dodgers Triple-A affiliate and Sanders hit 26 home runs with 107 RBIs and batted .296.
In 213 AAA games, Sands hit .288/.362/.552 with 55 home runs and 195 RBIs and 38 doubles. In 251 career MLB at-bats, Sands has hit 244/.325/.376 with 4 home runs and 26 RBIs.
The power with Sands is intriguing but he also has an ability to steal bases when needed. With a big loop in his swing though, Sands has 60 strikeouts in 251 MLB at-bats.
Sands has potential to be a power corner outfielder, something the Pirates don’t have in Travis Snider who they like a lot more that others.