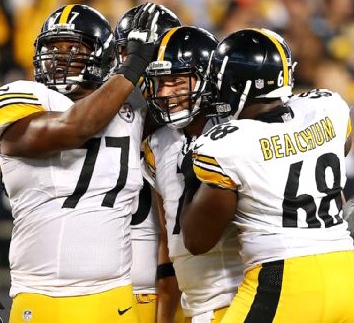 Steelers 37 – Panthers 19
The Steelers were a team that was exposed in week 2 and had what looked like a daunting task in a week 3 road matchup against Cam Newton and the Carolina Panthers.
The Steelers rebounded in a big way with a 37-19 win over the Panthers, improving to 2-1 on the season.
In what was a dominant performance in all three phases, the Steelers won the line of scrimmage battle in a big way, a telling story of their physically dominating win.
Carolina is a team that resembles how the Steelers were built early in Ben Roethlisberger’s young career — a dynamic playmaking QB, dominant defense and a physically pounding team.
However, it was Pittsburgh that went on the road and took it to the Panthers and beat the Panthers at their own game. The Steelers led just 9-3 at the half but were in control of the game and took the game over in the third quarter with 28 second half points.
On the Panthers opening drive of the second half, Jarvis Jones forced a fumble on a Cam Newton sack for the Steelers first takeaway of the season, setting the Steelers offense up at the 17 yard line. Pittsburgh would soon get some luck as the Panthers were called for encroachment on a 4th and 4 Steelers field goal attempt. The Steelers given a first down that would lead to Ben Roethlisberger connecting with Antonio Brown for a 7 yard touchdown on the next play, the Steelers first touchdown in over 8 quarters.
The game swung from being potentially 12-3 Steelers to 16-3 Steelers and Brown would add another touchdown to put the Steelers up 23-6 in the third quarter. Brown had a big game with 10 receptions for 90 yards and 2 touchdowns in the win.
Newton and the Panthers cut the Steelers lead to 23-13 with 13:28 left in the 4th quarter and the Panthers would get a three and out on the next Steelers drive as momentum was starting to swing to the Panthers for first time all game until Brad Wing booted a 59 yard punt and Philly Brown muffed the punt twice and Robert Golden recovered the ball in the end zone, giving the Steelers a 30-13 lead.
The Steelers had 454 yards of offense and Pittsburgh’s offensive line punished one of the NFL’s best defensive fronts. Pittsburgh had explosive plays of 81 yards from Le’Veon Bell and 50 yards from LeGarrette Blount as the Steelers rushed for 264 yards in the game.
Bell who is starting to emerge as one of the most dynamic running backs in the game, rushed for 147 yards on 21 carries. Blount didn’t see much time until the 4th quarter and still gashed the Panthers for 118 yards, touchdown on 10 carries.
The story of the game, though, for the Steelers was their defensive line, a group that is normally over-matched. Pittsburgh got constant pressure on Newton and it was led by the likes of Cam Heyward, Steve McLendon and Brett Keisel up front. They got a constant push and opened lanes all game for linebackers who brought pressure from the outside.
The Steelers now sit at 2-1 with their next four games against Tampa Bay (0-3), @ Jacksonville (0-3), @ Cleveland (1-2) and Houston (2-1).
Notes: Ike Taylor suffered what is believed to be a compound fracture to his right forearm…..Ryan Shazier left the game with a right knee injury and did not return…..Jarvis Jones suffered a wrist injury……..Antonio Brown tied an NFL record with 19 straight games of at least 5 catches, 50 yards…..Ben Roethlisberger went 22/30 for 196 yards and 2 touchdowns…..The Steelers had two 100 yard rushers for the first time since October 26, 1986.