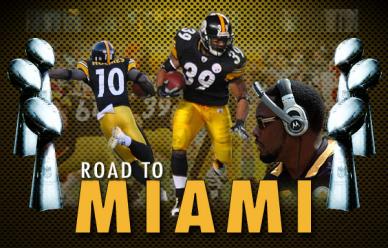 The road to Miami kicks off Thursday night as the six time Super Bowl champion Pittsburgh Steelers begin their title defense at home against the Tennessee Titans.
Trying to repeat as champions is the hardest thing to do in sports. The Steelers found that out in 2006.
The focus for the Steelers has been on the upcoming season not what they accomplished in 2008. Some believe the Steelers are deeper and more talented than last year.
Opening up the season with the 4th easiest schedule in the NFL, expectations are high and it all starts Thursday night at 8:30 p.m.
Two reasons the Steelers will be a top contender to repeat; Ben Roethlisberger and a dominating defense.
Entering his 6th NFL season, Roethlisberger has emerged as one of the games top quarterbacks. Roethlisberger has a number of playmakers around him led by wide receivers Santonio Holmes and Hines Ward.
Statistically (17 TD – 15 INT) Roethlisberger didn’t have a great season in 2008. Look for his numbers (32 TD – 11 INT) to be similar to 2007 this year.
* On defense the Steelers return 9 of 11 starters. Gone are inside linebacker Larry Foote and cornerback Bryant McFadden.
McFadden joined the Arizona Cardinals, signing a two year deal and Foote went back to his home state, signing with the Detroit Lions.
McFadden and Foote were key players to helping the Steelers claim their 6th Super Bowl title but the team won’t miss a beat.
3rd year Linebacker Lawrence Timmons will replace Foote at MLB. Timmons who will miss the Steelers season opener is an emerging star and while he is not the run stopper that Foote was to this point, Timmons is dynamic playmaker who will make the Steelers more athletic.
Replacing Bryant McFadden will be 3rd year cornerback William Gay. Gay is a physical cornerback who has more ball skills than McFadden. The Steelers really like his potential.
At key positions the Steelers are young. They’re not an aging defense by any means.
One concern could be the Steelers defensive line. Aaron Smith has not shown any signs of slowing down but he is 33 years old.
Defensive Tackle Casey Hampton is no longer the dominating player he was in the past. Hampton just turned 32.
A player to watch will be 1st round pick DE Ziggy Hood. Hood will make his impact on special teams to begin the season. By mid-season he could be a contributor on the Steelers D-Line.
One area where the Steelers expect to be much improved is on special teams. The Steelers might have found a gem in Canadian Football League star Stefan Logan.
Logan finished the 2009 preseason with 5 kickoff returns for 185 yards and 9 punt returns for 191 yards and a touchdown. He will begin the season as the Steelers primary punt returner and will split kick return duties with Mike Wallace.
The return of 3rd year punter Daniel Sepulveda will be significant for the Steelers. The Steelers ranked near the league bottom on net punt yards in 08 as Sepulveda missed the entire 2008 season.
Two concerns for the Steelers in 09; running game and offensive line.
The offensive line figures to be a weakness in 2009. The Steelers return four of five starters with Trai Essex replacing the injured Darnell Stapleton.
Quarterback Ben Roethlisberger was sacked 46 times last year and the Steelers struggled in short-yardage situations.
A bright spot in the preseason and training camp has been the play of right tackle Willie Colon. The Steelers are hopeful that Colon, left guard Chris Kemoeatu and left tackle Max Starks continue to progress.
The Steelers ranked 23rd in rushing last season. Personnel wise, the Steelers have strong core of running backs in Willie Parker, Rashard Mendenahall and Mewelde Moore.
The Steelers don’t need to be a top five rushing team but they need to improve in short-yardage situations especially at the goal line.
Willie Parker is expected to get the first shot as the Steelers primary goal line back.
The Steelers have won six straight openers and Heinz Field will be electric Thursday night.