Steelers escape with a 23-20 win vs Indianapolis 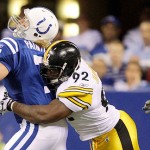 Pittsburgh’s defense and Ben Roethlisberger’s late-game mastery did it again.
James Harrison’s late sack of Curtis Painter and Troy Polamalu’s 16-yard fumble return for a touchdown finally gave the Steelers a second-half lead. Roethlisberger set up Shaun Suisham for a 38-yard field goal with 4 seconds left to give Pittsburgh a 23-20 victory at Indianapolis on Sunday night.
It looked nothing like the Steelers’ trademark pattern until the closing minutes.
Roethlisberger turned over the ball three times during an 11-minute span in the first half, Pittsburgh (2-1) rushed for only 67 yards and the vaunted Steelers defense produced only one sack — the one Polamalu scored on.
But Roethlisberger took the Steelers on a 60-yard scoring march that ended with Suisham’s kick.
Roethlisberger was 25 of 37 for 364 yards with one touchdown. Mike Wallace caught five passes for 144 yards and an 81-yard score, the longest of his career.
But the feisty Colts (0-3) rallied from a 10-point first-half deficit, took a 13-10 halftime lead and didn’t fall behind again until Polamalu scored with 5:13 left in the game.
Joseph Addai ran 17 times for 86 yards and scored on a 6-yard run that tied it at 20 with 2:09 to go.
Indy’s defense just couldn’t hold it.
Pittsburgh took advantage quickly.
It got a 48-yard field goal from Suisham on the opening possession and took advantage of a terrible mismatch — linebacker Pat Angerer on Wallace — for the 81-yard pass to make it 10-0 in the first quarter.
Then Indy’s defense did its best Pittsburgh impersonation.
Robert Mathis stripped Roethlisberger on a sack near midfield and recovered the ball, too, setting up Adam Vinatieri’s 21-yard field goal midway through the second quarter.
On the next series, Dwight Freeney, coming from the opposite side, stripped Roethlisberger on another sack. Jamaal Anderson scooped up the ball, cut to the middle of the field and used a brilliant block from Kavell Conner to free himself for a 47-yard score. That made it 10-10.
The defense wasn’t finished.
On the next play, Roethlisberger’s deep pass for Emmanuel Sanders was picked off by rookie Joe Lefeged. Four plays later, Vinatieri hit a 25-yard field goal to make it 13-10 at the half — Indy’s first halftime lead of the season.
Even when the Steelers finally got into position to tie the score, they struggled. Suisham hit the left upright on a 36-yard field goal in the third quarter.
Suisham tied it with a 44-yard field goal with 12:10 to play, then things looked like they might return to normal when Harrison smacked Painter in the back and Polamalu scored.
But Painter didn’t waste his second chance.
He methodically took the Colts 80 yards, getting the most meaningful offensive TD of the season when Addai shook off the blitzing Polamalu and powered in from 6 yards to tie the score with 2:09 left.
Notes
Steelers WR Mike Wallace had 5 receptions for 144 yards, including an 81 yard touchdown reception. Wallace has recorded 6 straight 100-yard receiving games (regular season)…..Steelers QB Ben Roethlisberger’s 81 yard TD pass to Wallace was the longest of his career…..With the victory against Indy, Roethlisberger has now defeated 29 NFL teams in his career….James Harrison’s strip sack that was recovered by Troy Polamalu for a touchdown, was the first turnover of the season for the Steelers defense.
Injury Report
The Steelers O-line was hit hard with injuries after struggling for most of the night….Doug Legursky left the game with what is feared to be a dislocated left shoulder….. Marcus Gilbert exited the game with a mild shoulder injury and Jonathan Scott suffered a lower body (undisclosed)…..WR Arnaz Battle left the game with a hamstring injury….