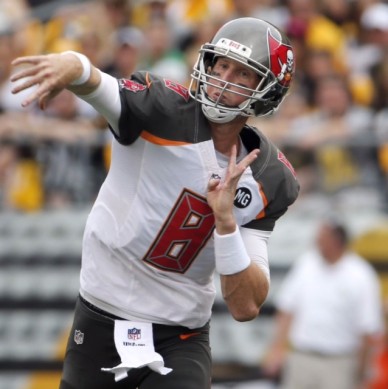 THE REAL STEELERS SHOWED UP
The Pittsburgh Steelers played football like a team that clearly hasn’t turned the corner and got what they deserved in a 27-24 loss to the Tampa Bay Buccaneers on Sunday afternoon.
After overcoming a 10-0 first quarter deficit, the Steelers failed to put the lowly Buccaneers away, who stunned the Steelers with a late scoring drive led by backup quarterback Mike Glennon and WR Louis Murphy, who was just signed this week.
Holding a 24-20 lead with under two minutes, the Steelers offense failed to get a first down to close out the game and with 50 seconds to play in the 4th quarter, Brad Wing punted just 29 yards, setting the Buccaneers up at the Steelers 46 with 40 seconds left and no timeouts.
On 2nd and 10, Glennon then hit Murphy for a 41 yard gain, setting up a game winning Vincent Jackson touchdown two plays later with seven seconds left to stun the Steelers.
After the Buccaneers gained just 64 yards in the first half, Glennon threw for 245 yards in the second half, including 302 yards in the game.
The Steelers defense was credited with 10 QB hurries and 7 QB hits, but only sacked Mike Glennon once.
Mike Evans provided a mis-match due to their size, but it was Murphy who provided the Steelers the most problems from the slot.
On his game changing 41 yard reception, the Buccaneers got Murphy out in coverage against Mike Mitchell.
“They were able to find the hole in the coverage,” safety Troy Polamalu said of Muphy’s 41 yard reception that setup Jackson’s game winning. “We probably could have done some things to match that route much better.”
The Steelers relying on their defense to close out the game proved costly but this is a team this year where the offense has to be able to put teams away to make up for a poor defense. They failed to come through and this was a loss that can be attributed to all phases.
The Steelers are 18-18 over their last 36 games and there’s nothing to suggest this team is any different than the 8-8 teams from the past two seasons. Not to mention the division looks stronger than last season.
The real Steelers showed up Sunday, not the ones last week who were dominant against the Panthers, a game that doesn’t look so impressive after the Ravens whooped Carolina by 28 points on Sunday.
We’ve all know this team has some serious holes in some key areas and that’s a reflection on the front office, but the lack of consistency and players not being hungry to win is a reflection on the players and coaching staff.
The Steelers were penalized 13 times for 125 yards as the Steelers have become one of the most undisciplined teams in the NFL.
That falls directly on the head coach.
“The bottom line is that we are an undisciplined group,” Tomlin said. “We are too highly penalized. Obviously we are not coaching it. We are allowing it to happen. So I take responsibility for that. We are not going to win close football games being penalized in the manner in which we’ve been penalized over the first month of the season. It’s unacceptable. It’s inexcusable. In a nutshell, that is the story of the outcome of the performance. There are some positive things and there are some negative things any time you play football. That is the case. But the defining factor in determining the outcome of that football game is that we were too highly penalized. It’s ridiculous….”
Mike Tomlin is a good football coach but is he running his course? Tomlin earned high marks around the league last year for the Steelers finishing 6-2 after an 0-4 start, something what many inside the NFL claim is a sign of a very good coach and that the group still plays for him.
That may still hold true but the Steelers are not as talented as the Seahawks, Broncos, where their talent can overcome penalties, mistakes and poor preparation. This is a group that has to do the little things well and that starts with being a well coached and fundamentally sound football team.
The way they lose games to inferior teams like the Buccaneers is nearly the same script every time going on now for a third season.
The coaching staff is not getting this group to buy in for some reason or not, and the talk won’t go away of the Steelers having a problem where players aren’t hungry enough to win and don’t put the needed work in during off-days. — And that’s just not the young players.
Troy Polamalu seemed to point towards that yesterday citing the Steelers are not disciplined enough when it comes to “practice and film study.”