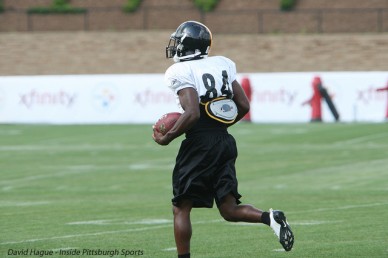 POST-PRACTICE BUZZ
ROETHLISBERGER LOOKING BROWN’S WAY
— Today’s workout featured the two-minute drill that began with the 1st team offense having to go 62 yards in 1:52. The 1st team offense ended up going 61 yards but failed to score:
— Roethlisberger was not very sharp today, the first time all camp. He was 5 of 11 for 47 yards and had a scramble of 12+, during the first portion of the 2-minute drill starting at their own 38 yard line.
To no surprise Roethlisberger continues to look heavily towards Antonio Brown’s direction. Brown was targeted 6 times during the 1st two-minute drill session and caught 4 passes for 42 yards.
Despite driving 61 yards, Ben was off the mark on a number of occasions, missing Brown for a score after he beat Curtis Brown deep
— Brown and Roethlisberger though would hook up during the second two-minute drill session that had the 1st team O starting at the 48 yard line with 1:06 to play. On the 3rd play, Roethlisberger hit Brown for a 36 yard touchdown, a beautiful strike as Brown got behind Keenan Lewis. Lewis looking to hold off Cortez Allen for the starting cornerback spot opposite Ike Taylor was beat badly on the play. Lewis though wasn’t the only one who struggled to cover Brown as second year corner Curtis Brown also struggled to cover Brown when matched up against Antonio. Brown had around 80 receiving yards combined in the first and second two-minute drill sessions.
ALLEN FLASHES ATHLETICISM, PLAYMAKING ABILITY
— The Steelers coaching staff is very high on Cortez Allen for a number of reasons from his size, athletic ability and playmaking ability. All of those attributes were on display during the 2-minute drill and to end the session Allen showed that athletic ability leaping over Tony Clemons for an interception against the second team to close out the session. For a team that couldn’t create turnovers last season, it’s going to be hard to keep Allen off the field.
HEYWARD HAD DOMINATING PRACTICE
— I mentioned yesterday in my Steelers rumblings feature as to why the Steelers coaching staff feels the defensive line is going to be improved over last season. One big reason is Cam Heyward who from a physical standpoint was a force to be reckon with in 1-on-1 drills today. Rookie offensive lineman Kelvin Beachum who himself has a nasty edge to his game, had no chance against Heyward today, getting beat on three straight occasions and Heyward was coming after O-lineman with authority today.