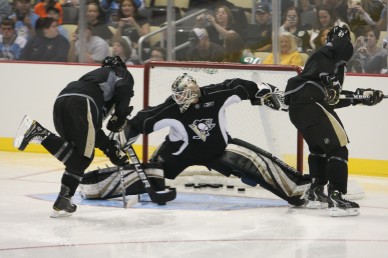 Sunday’s Camp Observations & Buzz
The biggest positive for the Penguins through two on-ice sessions is the progress of Sidney Crosby. Crosby for the second straight day went through another practice session, participating in all drills with his teammates.

What was impressive today with Crosby was his ability in traffic and the way he battled. Crosby went hard in drills, going full exertion and of note even took several reps as a primary backchecker in a forecheck/backcheck drill mid-way through practice.
“They were both all out, ” Crosby said on the exertion of today’s practice. Today was a little bit tougher because yesterday was the first day of going that hard and on back to back days.”
Overall Crosby was pleased with today’s practice session.
“I felt pretty good, ” Crosby said on today’s skate. “The last couple days have been good and It’s been a pretty good test here. I’m happy with the way it’s gone.”
Crosby said he hasn’t suffered any symptoms to this point since camp started on Saturday.
A big thing for Crosby has been practicing in traffic the past two days, something that he struggled with last April when he was attempting to comeback in the playoffs.
“I had a lot of trouble with that early on, ” Crosby said on playing in traffic. “It’s nice to be out there with bodies moving around and moving around faster than they had before and being able to handle that. It was good to go through that today, ” Crosby said.
Head coach Bylsma also stressed the importance of Crosby practicing in traffic.
“Being in traffic and around people is a part of where he’s at right now, ” Bylsma said. “Being in traffic….being around people….being in numbers is a part of where he’s at in his rehab and skating. You can see how hard he’s pushing out there in the drills when he’s skating up the ice.That’s a part of what he’s expecting on the ice.”
So far through two-days, you couldn’t ask for more from Crosby in how things have gone. Crosby is currently scheduled to skate again tomorrow morning, barring that no symptoms flare up between now and tomorrow.
More Tidbits
*James Neal’s transition to right wing continued today. Neal spent the entire practice session on the right side as Jordan Staal centered Neal and Kunitz. With the way he likes to cut to the middle when attacking the offensive zone, the move to right wing is starting to grow on me.
With Dan Bylsma appearing to be high on the Sullivan – Malkin – Kennedy unit, going with a Kunitz – Staal – Neal line won’t be a surprise if Crosby’s not ready to go for the start of the season.
*Sidney Crosby centered enforcer Steve MacIntrye and Nick Johnson for the most part in today’s final practice session. Speaking of Johnson, it’s hard to see any scenario where he finds himself on the opening day roster. Not only are there no spots for him, everything seems to be so slow with him so far.
*The Penguins will be cautious with Dustin Jeffrey for much of camp and in the preseason. He’s not there yet and I don’t see him being cleared to play until next weekend at the earliest and that’s an optimistic view.
*Brooks Orpik  who’s not yet 100 percent, went through most of today’s practice paired with Kris Letang. Like Jeffrey, the Penguins are being cautious with him and will limit his playing time in the preseason.
*One under the radar observation so far. Goaltender Scott Munroe was a quality addition to the organization and the Baby Pens are in great hands with Brad Thiessen and Munroe.
On Tap for Tomorrow
Black and Gold Game in Wilkes Barre
9:30 – 10:30 a.m. – Practice Team Black
10:30 – 11:30 a.m. – Practice Team Gold
11:30 a.m. – 1:30 p.m. – Non-Game Group Practice
7:00 p.m. – BLACK AND GOLD GAME (IN WILKES-BARRE, PA.)