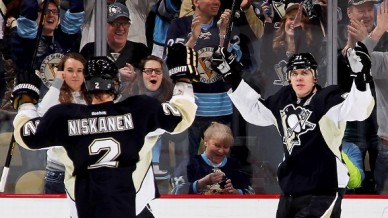 PITTSBURGH 6 – TORONTO 5 (SO)
1. We saw the good and the bad from Penguins Wednesday night in their thrilling 6-5 shootout come from behind win over the Toronto Maple Leafs. The Penguins were a disaster in the first 30 minutes with turnovers and suspect goaltending, falling behind 4-1, 42 seconds into the second period. “I think you can look at four specific mistakes that we made, whether it’s with the puck or mental mistakes, that gave them goals,” Penguins head coach Dan Bylsma said. Costly mistakes came from Marc Andre Fleury, Kris Letang and the Penguins only having four players on the ice for a goal against, plagued the Penguins in the first 30 minutes.
But, Memo to the rest of the NHL, don’t consistently put the Penguins on the power play when you’re holding a big lead against them. The Leafs gave the Penguins life by being undisciplined and three straight power play goals from Evgeni Malkin, Kris Letang and James Neal got the Penguins back in the game and led to them taking control of the game. “That’s not the way we draw it up, but we found a way to stick with it,” Sidney Crosby said. “I think it’s so ugly, it was just so bad, there’s no easy way to describe it. Fortunately, we stuck with it, drew some power plays and took advantage of them.”
2. This was certainly a game of two parts and the second half of the game was just completely dominated by the Penguins. Pittsburgh outscored Toronto 2-0 in the third period and outshot the Leafs 19-0 in the third period/overtime. Overall the Penguins outshot Toronto 48-24. The Penguins had an astounding 85 shot attempts in the win. One thing about this team is that you rarely see them quit.
3. The big development for the Penguins is that Evgeni Malkin is BACK. 2 Goals and 1 assist for Malkin in the win and what we’re seeing from him is he’s getting to the tough scoring areas as evident on his game tying goal in the third period and the disallowed goal. When Malkin and Neal are going like they are right now, the two are one of hockey’s most dangerous 1-2 combos.
4. Dan Bylsma was right to bench Marc Andre Fleury who was handling the puck careless behind the net on multiple occasions before he got burned for a goal by James van Riemsdyk to put the Leafs up 3-1. Where Bylsma missed the boat was seconds later in not benching Kris Letang who made a horrible turnover in getting pushed off the puck behind the net, leading to a Phil Kessel goal 33 seconds later and it was 4-1 Leafs.
It was a putrid play from Letang who had Brooks Orpik wide open to his left waiting for a simple outlet pass. There’s suddenly this talk that Letang is not fully 100% because of knee discomfort but his mistakes this season have been mostly decision making. Although Letang played a part in the Penguins comeback, finished game with goal and 2 assists, Bylsma had a great chance to bench Letang to make a statement and sit a star player. Bylsma’s inability to put a star player in their place is going to remain a problem on this team.
5. Penguins GM Ray Shero mentioned in last years season ending press conference that one of the goals of this franchise is to “entertain the fans”. The Penguins sure did that Wednesday night, but you have to wonder if losing a game like that would be better for the Penguins in the long run as they have the mindset they can always storm a comeback.
Happy Thanksgiving to all our subscribers and readers of the site. Thanks for the continued support over the years.