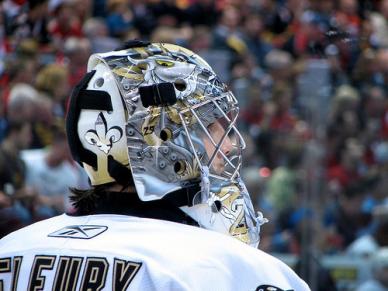 Fleury a lock for Team Canada?
Marc Andre Fleury is off to his best start of his career, posting a 10-2 record with a 2.14 goals against average through 12 games.
Fleury is tied for the league lead in wins and is second in goals against average.
Fleury’s strong start and the struggles of Roberto Luongo (6-6, 2.79 GAA) and the inconsistent play of Martin Brodeur (7-4, 2.42 GAA) has sparked speculation that Fleury should get a legitimate shot to win the No. 1 goaltending spot for Team Canada.
Fleury has also led his team to back-to-back Stanley Cup Final apperances that included a Stanley Cup title last summer. Unless Fleury has a complete meltdown the next two months of the season, he has clearly surpassed Cam Ward and Steve Mason for the No. 3 goaltending spot.
Now the discussion will be whether Fleury should be Team Canada’s No. 2 goaltender or even their No. 1.
In speaking to the national media yesterday on a conference call, Team Canada GM Steve Yzerman had this to say about Marc Andre Fleury.
“With his confidence and his ability rising, it has enhanced his position within the Olympic team.”
Yzerman did not discuss Fleury any further but Fleury is not only making a case to make the team but he’s making a case to be in the running for the team No. 1 spot.
Will “Hockey Politics” win through and Fleury won’t have an opportunity to win the No. 1 job? Just one of many story lines to watch as the Olympics inch closer.