The Latest From Latrobe 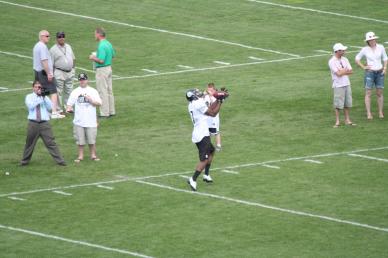 There has been a growing sense that if Limas Sweed wins the #3 receiver spot, it is a foregone conclusion that Hines Ward would be moved to the slot during three receiver sets.
That may not be the case as Sweed continues to get reps in the slot. Sweed will be an asset to the Steelers on the outside but just because he’s 6-foot-4, doesn’t mean the Steelers don’t plan on using him in the slot at times this season.
Sweed has had a very strong camp as he was the star of Sunday’s practice and made a few more tough grabs on Monday.
Sweed has an early edge on Shaun McDonald for the #3 spot.
*Linebacker Bruce Davis (2008, 3rd round pick) will have to make his mark on special teams if he’s going to earn a roster spot. For now, he remains on the 3rd team kick coverage. Doesn’t bode well for his chances but it’s early.
*Cornerback Joe Burnett (2009, 5th round pick) is much more comfortable returning punts than kicks.
Wide Receiver Mike Wallace (2009, 3rd round pick) has shown explosive speed in the open field but
he has a ways to go in the receiving department. His impact will be on special teams and he will have the first opportunity to be the teams primary kick returner. This morning he worked with the first team.
*Roman Foster has really caught the eye of the coaching staff. Foster has performed well at left guard.
Charlie Batch nor Dennis Dixon have set the world on fire in camp so far. Batch continues to work with the second team while Dixon is running the 3rd team.
The opportunity is there for Dixon to unseat Batch.
*Cornerback William Gay has been one of the most physical players in camp.
*The Steelers have been very impressed with 2009 3rd round pick Keenan Lewis.
*It will not be long before Ziggy Hood make an impact on the field. He’a student of the game who strives to get better. Learning from Aaron Smith won’t hurt either.
*Trai Essex has arrived to camp in great shape and he could be counted on to play a signifcant role this season.
With the injury to Justin Hartwig, Essex is running with the first team at guard and may stay there for a while due to Darnell Stapleton’s knee injury
*Running back Issac Redman appears to be one of those sleepers in camp who does the little things very well.
*In a contract year along with Rashard Mendenhall pushing for carries, Willie Parker is deterimined to get back to being a 1,000 yard rusher in this league.
There doesn’t appear to be any hard feelings from Parker that the Steelers haven’t approached him about an extension.