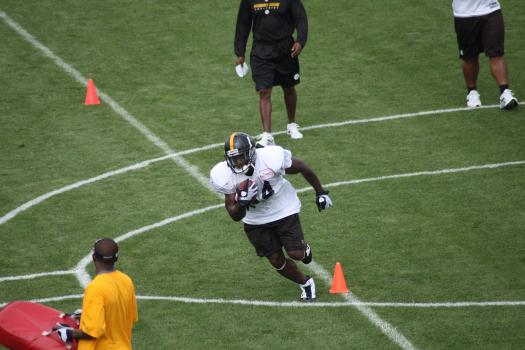 Thursday’s Notes
*Starting left guard Chris Kemoeatu missed practice today with a foot sprain. Kemoeatu is optimistic that he will practice on Friday and play on Sunday.
If Kemoeatu is out, Doug Legursky not Ramon Foster may start at left guard. As things stand right now, Foster will be inactive on Sunday with Legursky and right tackle Jonathan Scott being active.
Legursky would be the primary backup at guard and center, while Scott would be the primary backup at tackle and long snapper.
*Earlier this summer Steelers offensive coordinator Bruce Arians gave 3rd year running back Rashard Mendenhall high praise, calling him a Marshall Faulk, Edgerrin James type of back who can do everything. Not only will Mendenhall be the Steelers every down back, he will remain the Steelers goal line back.
Arians confirmed that following practice today as Isaac Redman will get some looks in short-yardage situations but Mendenhall will be the primary goal line back.
Arians says there’s no reason to substitute Mendenhall as he can handle the goal line job.
Mewelde Moore will open up the game as the Steelers No. 2 running back but Isaac Redman will handle that role in the second half.
*A hot topic of discussion this week is whether the Steelers will give third year quarterback Dennis Dixon the green light to run. Bruce Arians said today that the Steelers do not have any designed running plays set up for Dixon.
However, veteran wide receiver Hines Ward who seems to have an opinion on just about everything, believes Dixon needs to use his legs.
“If protection breaks down and he’s unsure about coverage, take off, run,” Ward said this week. “I like Dennis with the ball in his hands when he’s running. Good things happen when he does that.”
Ward also said today that Dixon has all the attributes when in time he could reach the level former Steelers quarterback Kordell Stewart did.
“He has all the attributes as Kordell and with time he probably can be just as good as Kordell, ” Ward said.
In 1997, Stewart entered his third NFL season and first as a starting quarterback. He threw for 3,020 yards and 21 touchdowns and 17 interceptons. Stewart also rushed for 476 yards and 11 rushing touchdowns, leading the Steelers to the AFC title game.