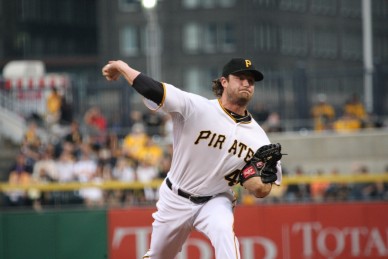 1. Gerrit Cole is never going to be the No. 1 Ace in the mold of a Max Scherzer so many want to see out of him on a consistent basis and envisioned as the No. 1 overall pick in 2011, but he can still give you a night like this where he looks unhittable that will at one point in the near future have the Pirates receiving the type of Chris Sale offer they seek down the road for Cole.

As for the present, the Pirates rallied again for a third straight win over the Brewers, 3-2 in 10 innings at PNC Park.

They’ve now trimmed a seven game deficit for the division lead to four.

Francisco Cervelli drove in a game tying single in the ninth to force extra innings, and then in the 10th, Max Moroff delivered a bloop single, scoring Josh Harrison for the walk-off win.

Winners in 10 of their last 12, the Pirates continue to show great resiliency.

It started at the top with Cole who struck-out a season high 10 batters in seven innings and baffled the Brewers all night. He continues to be lights out against the NL Central, 1.86 ERA and 60K’s in 58 innings.

It might not show in the attendance, there was a buildup and buzz leading into tonight’s game. A major swing where the Pirates would be either four or six games back after tonight.

The performance the Pirates got from Cole tonight is what should be expected in this situation from who is supposed to be their No. 1 starter and they got it.

2. The Pirates have the second best record in the NL over their last 20 games and things are starting to come together.

Among the key developments:

*The rotation is over-achieving.
*The bullpen has been very strong this month and Tony Watson has started to look like the Tony Watson of the past.
*Francisco Cervelli who was 3-for-3 tonight is starting to hit well. A lot of complementary players like Cervelli are starting to raise their game.

Another comeback tonight and another walk-off hit from a young player.

Some of what’s playing out during this surge might not be sustainable and likely isn’t, but momentum can sometimes be a beautiful thing. Clint Hurdle owes it to this group tomorrow not to go with a typical rest lineup and go all out for the sweep.

On July 1 the Pirates were six games out. They’ve gained just two games on the Brewers despite winning 10 of 12. Tomorrow afternoon has to be looked as a big game with the lineup.

As the Pirates are surging, so are the Cubs who on the heels of acquiring Jose Quintana, just completed a 6-0 road trip and have moved 1 1/2 games out of first.

Chicago who has looked into trading for Gerrit Cole (not happening this deadline), are still in the market to add another impact arm.

What we’re seeing playing out is the Brewers are not a true first place team and that likely makes the Cubs even more aggressive at the deadline to put themselves in a better position to defend their title against the Dodgers and Nationals who are head and shoulders above the rest of the NL.

I think at the end of the day, the Dodgers and Nationals being so good and the Cubs surging will keep the Pirates straight forward on attacking the deadline similar to 2016 even as they close in on a winnable division.

3. As the Pirates inch closer to potentially being buyers at the deadline or at least standing pat, Pirates owner Bob Nutting is making sure he’s properly prepared.

4. Sports-Express in Russia released a list of the top-50 Russian players of All-time in the NHL.

Evgeni Malkin came in at No. 1.

I’d lean slightly in Sergei Fedorov’s direction who was one of the NHL’s greatest 200-ft players ever and a possession monster, but there is no wrong call on Malkin or Fedorov.

Four of the top-12 ranked players (Evgeni Malkin #1, Sergei Zubov #6, Sergei Gonchar #9, Alexei Kovalev #12) on the list played for the Penguins at one point and three others made the list, Darrius Kasparaitis, German Titov and Dmitry Mironov.

Sergei Zubov should have been a great Penguin for several seasons. Instead the Penguins couldn’t trade him fast enough after one season.

Zubov was traded to Dallas for Kevin Hatcher after the 1995-1996 season as he wasn’t well liked by the star players. The story is the Dallas Stars were shocked when they received a phone call from Craig Patrick who offered Zubov for Kevin Hatcher.

Pittsburgh had financial problems looming in the mid-90’s but this wasn’t one. Zubov was making $1.6 million at the time and they moved him for Hatcher who was making $2.5 million and his salary was rising.

Patrick sure robbed the Penguins of having a couple premier young stars around Jagr in those initial years after Lemieux retired with the Zubov trade for an aging Kevin Hatcher and the Markus Naslund trade.

Zubov would have went on to have been one of the Penguins greatest defensemen ever.

He needs that ‘$15 mil’ and Bell will now try to play hardball and holdout for the start of camp by trying to get the Steelers to increase [hide] his one year franchise tender from $12.1 million to $15.1 million.

That isn’t going to happen.

Pittsburgh has told Bell’s agent they will not negotiate again until next season.

Wonder what sammich thinks of the 50 greatest Russians?

FWIW, if Malkin plays another 542 games he would obliterate Fedorovs numbers. Granted he would have to keep up the pace hes been at but I think the case for Geno over Fedorov is not unsubstantiated. Guess it really depends on what Malkin does on the back end of the career

the juice is loose

Shake your head at Bob Nutting for buying a newspaper company, not laying people off in a dying industry.

Bye-bye Le’Veon after this coming season.

Wouldnt really say the rotation is collectively overachieving during this 20 game stretch. In 3 starts each this month, Kuhl is over achieving (2.49 era) and Nova is under achieving (4.34). The others are about where you expect:
Cole 2.37
Taillon 3.60
Williams 4.17

Bob Nutting is a horrible owner and a douche bag who isn’t really interested in winning. he enjoys losing and collecting big revenue sharing checks from MLB…This team will never win until it has a owner who wants to do that…period 3 winning seasons in the last 25 pathetic

100% agree. The bucs are an above average team in the regular season… but no hope in the playoffs, don’t be fooled all.

You are dissing douce bags with that comparison!

I’m kinda shocked. Point number 1 might be the most coherent thing Depaoli ever wrote, unfortunately it went down hill fast from there.

What does Bob Nutting buying a newspaper in Uniontown and firing the staff have to do with the Pirates and their finances? The companies are separate entities that operate on their own financial structure not from Bob Nutting’s personal check book. Money from 1 can not be used for the other unless Nutting is will to spend time in federal prison.

Before you go any further, does BN have a holding company where all his commercial pieces–including the Bucs–are under a single umbrella as subs?