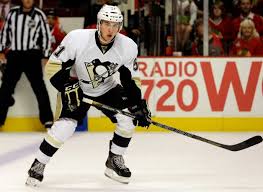 Penguins GM Jim Rutherford has talked up defenseman Derrick Pouliot quite a bit this summer, despite the coaching staff being pretty much married to the idea of who the top-6 defensemen will be when the season starts.

The group doesn’t include Derrick Pouliot.

Pouliot’s future in Pittsburgh is a hot topic in Penguin circles and outside of Pittsburgh.

One eastern conference executive put the odds at 60% that Pittsburgh will trade Pouliot this season, another predicted the Penguins will use Pouliot as bait in a package to move Marc Andre Fleury’s salary at somepoint this season.

“His name was out there all summer,” one executive said of Pouliot.

Set to enter his third professional season, Pouliot’s work ethic off the ice and hockey smarts on the ice has frustrated the Penguins staff.

Pouliot has reached the stage that Simon Despres did in the Penguins’ organization where it was a matter of ‘when not if’ in regards to being traded.

One team that monitored Pouliot’s availability all summer was the Buffalo Sabres, league sources say.

The Sabres approached Pittsburgh about Pouliot around the draft and again in late July.

A name that popped up in talks was 25 year old winger Marcus Foligno.

NHL sources said to expect the two sides to re-engage in talks this fall.

One Penguin Bylsma has no interest in a reunion with is goaltender Marc Andre Fleury, multiple sources say.

Don’t expect that to change.

When Fleury was in play for the brief period during the draft, Buffalo ruled out making a move for Fleury and let’s just say Bylsma didn’t give the best recommendation for acquiring Fleury.

Jesus Christ, D is back. How many kids did you have last week?

Disco said fleury is a good goalie and can get easily 40 wins a season he said this during the in game interview. But reality is fleury would not want to play under that circus system of DB that he ruined his numbers

Best part is the opposite is true… Bylsmas inability to coach was the primary factors in those teams imploding. We seen a great example of this in the Olympics. You fucken tool

dickso did suck, but st.bleury’s sub .850 save % didn’t help either. it’s nice how you mind wiped that you slave.

yeah because sabres two goalies are any better then fleury

Why does Fleury smiling bother you?

because goalies aren’t supposed to smile and act goofy. they are supposed to have stone faces and focus. it’s not by accident that the only goalie in the NHL who laughs and goofs around on the ice has the worst playoff save % since 2009.