Tomlin: “Easy decision for me” to draft Le’Veon Bell over Eddie Lacy 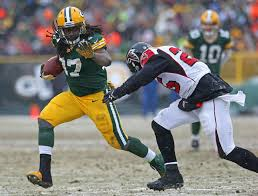 RUNNING BACK COMPARISON
Le’Veon Bell is always going to be compared to Eddie Lacy after the Steelers passed on Lacy and selected Bell in the second round.
Lacy has been a beast for the Packers and a top Rookie of the Year Candidate with 1,028 rushing yards and 8 touchdowns. In 248 rushing attempts, Lacy is averaging 4.1 per carry.
Bell has struggled to get the Steelers running game going but has been a great asset in the receiving department. Bell has rushed for 646 yards and 6 touchdowns on 198 carries, averaging 3.3 yards per carry. Where Bell has made his big mark is as a receiver, collecting 43 receptions for 388 yards.
Bell’s ability as a pass catcher is among the reasons the Steelers preferred Bell over Lacy. Lacy, though, is no slouch in the receiving department and has 31 receptions for 236 yards. The Steelers were also scared off by Lacy’s toe injury leading up to the draft.
Steelers head coach Mike Tomlin said today that it was an easy decision to select Bell over Lacy. “Easy decision for me,” Tomlin said…..”Just a matter of preference,” Tomlin added saying the decision to select Bell and all draft picks is a Pittsburgh Steelers decision.