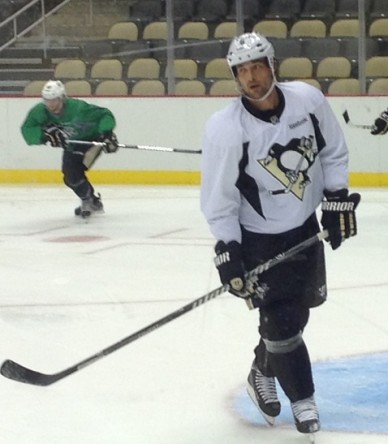 CANADIENS, OILERS KICKING TIRES ON ENGELLAND?
Deryk Engelland has been a healthy scratch for the first four games of the season and is expected to make his season debut tonight vs the Tampa Bay Lightning, replacing Robert Bortuzzo (healthy) in the lineup.
Bortuzzo’s improvement over the past year, though, has made Engelland potential trade bait and his future is expected to be dictated by whether the Penguins keep Olli Maatta or not as the team would like to go with 14 forwards and 7 defensemen once Matt D’Agostini and James Neal are back to full health. D’Agostini is expected to be ready to play the week of Oct 21 – Oct 27, while Neal’s return is still up in the air but could come around the same time frame I’m told.
Maatta will be appearing in his fifth game of the season tonight and a decision on Maatta is inching closer.
Since the 2010-2011 season, Engelland has been mostly a regular on the backend, appearing in 63 games in 10-11, 73 games in 11-12 and played in 42 of 48 games last season.
Teams around the league are aware of Engelland’s situation in Pittsburgh and Pittsburgh is receiving calls on the 31 year old who makes just north of the league minimum.
Chatter since around camp has surrounded the Edmonton Oilers being a likely landing spot for Engelland and Jim Matheson of the Edmonton Journal furthered that speculation yesterday writing about the Oilers seeking a “tough, mean third pairing defenseman”.
Engelland’s toughness is coveted and I’ve heard four teams have shown steady interest in Engelland with the Montreal Canadiens also among the group of teams to kick the tires on Engelland.
One league source believes Engelland would nab the Penguins a 4th round pick were the team to move him. The Penguins have strongly valued Engelland’s presence as a tough guy who can play and leadership in the room.
TONIGHT’S EXPECTED LINEUP VS TAMPA BAY
Chris Kunitz – Sidney Crosby – Pascal Dupuis
Jussi Jokinen – Evgeni Malkin – Beau Bennett
Dustin Jeffrey – Brandon Sutter – Chuck Kobasew
Tanner Glass – Joe Vitale – Craig Adams
DEFENSEMEN
Brooks Orpik – Paul Martin
Rob Scuderi – Matt Niskanen
Olli Maatta – Deryk Engelland
GOALTENDER
Marc Andre Fleury
*Tonight’s goaltending matchup will be Marc Andre Fleury vs Anders Lindback. A win for the Penguins as No. 1 goaltender Ben Bishop is injured.
*Sidney Crosby has 4 goals and 9 points in his last four games vs Tampa Bay.