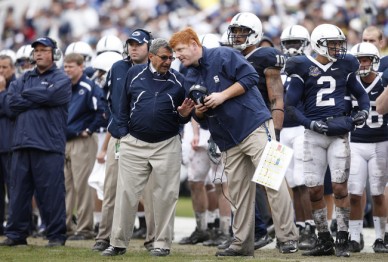 *Rumblings, musings and opinions*
1. Sandusky “Horsing Around”: Bob Costas of NBC conducted an exclusive telephone interview Monday night on NBC News’ “Rock Center,” with Jerry Sandusky
What came out of it is that Sandusky is taking the angle of “horseplay” not sexual conduct in regards to what happened, claiming his innocence.
“I am innocent of those charges,” Sandusky said who denied to Costas that he’s a pedophile. “I could say that I have done some of those things. I have horsed around with kids. I have showered after workouts. I have hugged them, and I have touched their legs without intent of sexual contact.”
Where things got weird was when Costas asked Sandusky if he was sexually attracted to young people. Sandusky seemed timid with his answer, saying “Sexually attracted, no….. I enjoy young people, I love to be around them, but, no, I’m not sexually attracted to young boys.”
When asked if there was anything he had done wrong, Sandusky said, “I shouldn’t have showered with those kids.”
Regarding the 2002 alleged incident that Michael McQueary walked in on, Sandusky again said he was “horsing around.”
“We were showering and horsing around, and he actually turned all the showers on and was actually sliding across the floor, and we were, as I recall, possibly like snapping a towel, horseplay,” Sandusky said.
Here’s what I took out of the interview. Sandusky truly doesn’t believe he did anything wrong and why didn’t Costas hit Sandusky hard about why was he showering with 10 year olds or however old they were at the time. Sandusky got a free pass on that one and how many young kids 10 years old or younger openly take showers in public places after activities, athletic events, ect? At that age, kids are so shy and don’t shower in public places,Â and Sandusky should have been pressed about that situation much harder.
2. McQueary key to Sandusky’s demise? A new development emerging right now is Michael McQueary and that 2002 shower scene. Even with several people coming forward, some legal analysts believe the 2002 shower scene is key to Sandusky’s demise or him somehow getting off in the end.
There are now a lot of different versions emerging regarding what McQueary did and didn’t do. He told the grand jury he witnessed Sandusky in the shower with a young child in what the grand jury described in their findings as Sandusky conducting anal sex. McQueary told the grand jury he told his dad about it then informed Joe Paterno a day later but did not give Paterno specific details.
McQueary also never told the grand jury that he stopped or confronted Sandusky but he’s telling former teammates and friends he “did stop it”
Here’s what McQueary told friends and teammates in an email NBC obtained, âI did the right thing … you guys know me … the truth is not out there fully … I didnât just turn and run … I made sure it stopped … I had to make quick, tough decisions.â
The associated press reports that McQueary also said in the email dated November 8th from his Penn State email account that “he told police and did the right thing.”
McQueary will conduct an interview at 7:00 p.m. tonight with CBS News 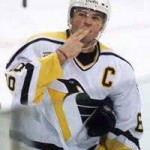 3. Jagr feels Penguin Management didn’t want him: 39 year old Jaromir Jagr is enjoying success in Philadelphia, tallying 17 points (6G-11A, +7 Rating) in 17 games to open the season and is playing a big role in the Flyers 10-4-3 (23pts) start, tied for the second best record in the NHL.
Jagr who has points in eight of his last ten games, has showed great chemistry with that “right handed centerman” he claimed this summer he had to play with as Claude Giroux is second in the NHL with 22 points.
The reason to bring up Jagr is that KDKA’s Bob Pompeani conducted an interview with Jagr on Monday and Jagr was spot on (in my opinion) when he said that Penguin management didn’t really want him.
Here are a couple quotes from the interview that caught my attention:
“I talked to Mario once on the phone, ” Jagr said, staying consistent with what he said this summer after signing with Philadelphia. “But I know a lot of people are probably mad about my decision. But, I felt like the management didnât really want me. I think the fans [made them make] the offer. Thatâs the way I felt.
Jagr on the Penguins offer which according to the Penguins was for $2 million per season: “The offer I got from the Penguins was probably the smallest offer. There [were] three bigger offers than the Flyers. I decided to come back to the NHL. If I wanted to make money I would stay in Russia because I would get [double what Iâm getting] here, plus tax free. But, I wanted to play [in the NHL].”
I wrote in the summer thatJagr didn’t owe Pittsburgh anything and the situation was blown out of proporation due to the local media claiming that there was an agreement in place with Jagr when there never was.
Jagr’s comment about Penguin management not really wanting him is something I can’t disagree with and that was the sense all along. A player you really want, you don’t go public with an initial offer and say “this is our final offer” and there’s really no negotiation.
Here is the Interview and article via KDKA.

4. Steelers Primed for another 6-1 finish to end regular season? The Steelers in their 2008 Super Bowl year went 6-1 in their final seven regular season games and in their 2010 Super Bowl run last season, went 6-1 in their final seven regular season games. The team in both seasons also started theÂ year 6-3, finishing with a 12-4 record after a 6-1 finish.
Things setup where a 6-1 finish to this season over their final seven games for the third time in four years is a strong possibility. With six games remaining, the Steelers will be favorites in at least five of the six games. The Steelers get a Kansas City team on the downhill that will likely be quarterbacked by Tyler Palko as Matt Cassel is sidelined until at least late December. The Steelers face an awful Cleveland team twice and get the luxury of hosting the Browns and not someone else on a short-week. The Steelers host a bad St. Louis team at home and get the Bengals at home.
The toughest game left on the schedule is a Monday night game in San Francisco but the Steelers will get 11 days to prepare for the 49ers.
5. Steelers or Patriots will represent AFC in Super Bowl: Despite the hiccup against Baltimore, Pittsburgh is still the team to beat in the AFC. They are a different team from earlier in the season and they are a team peaking, winning 5 of their last 6 games and have yet to play at full strength. The wide receiver group is going to take off when Emmanuel Sanders returns to action and the defense has yet to have LaMarr Woodleyand James Harrison play together at full strength this year as Harrison was bothered mightily with a sore back to open the year, followed by a broken orbital bone, and Woodley who might return vs Kansas City, has missed the past two games due to a hamstring injury.
Also in Pittsburgh’s favor…. Ben Roethlisberger is playing the best football of his career after an up and down start in the first four games.
I really like where this team is heading and a little prediction time – Pittsburgh or New England will represent the AFC in the Super Bowl.

*The Penguins will play their 59th straight game without Sidney Crosby but expect to get Tyler Kennedy back tonight.
*Dale Grdnic reports from the Steelers facility on Ben Roethlisberger’s injury and centers today’s Steelers Tuesday Analysis on Hines Ward’s diminishing roleÂ and hall-of-fame career with Steelers winding down.
*GM Neal Huntington on the Pirates search for a shortstop and the latest chatter.