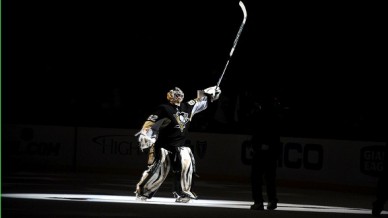 VOKOUN, SECOND PERIOD SURGE FUEL 4-0 WIN
To some the No. 1 seeded Pittsburgh Penguins might have looked like a desperate team going into tonight’s game, switching goaltenders in a 2-2 series by turning to Tomas Vokoun, altering their top-2 lines, in addition to making three other lineup changes, Joe Vitale, Tyler Kennedy being inserted into the lineup at the forward position and Simon Despres on the backend.
All of the moves paid off for the Penguins who won a pivotal Game 5, 4-0 on Thursday night to take a 3-2 series lead over the New York Islanders.
On the new additions to the lineup tonight, Tomas Vokoun provided a needed spark making 31 saves to record his 2nd career playoff shutout, Tyler Kennedy scored the opening goal, Joe Vitale added speed and grit to the 4th line and was 9 of 10 (90%) in the faceoff circle, while Simon Despres wasn’t the disaster he was in Game 3 and played a very sound defensive game logging 13:51 of ice-time and was a +1.
After being outshot 14-7 in a scoreless first period, the Penguins erupted in the second period with 3 goals in a 6:35 span, getting goals from Tyler Kennedy (1), Douglas Murray (2) and Sidney Crosby (3).
Tyler Kennedy struck first at 7:25 of the second period, as Kris Letang spotted Kennedy behind the Islanders D and got the puck up to Kennedy who came in in all alone on Evgeni Nabokov and beat Nabakov glove side to give the Penguins a 1-0 lead.
Kennedy who played with the type of intensity the Penguins rarely saw from him all season, was a factor from the drop of the puck, getting to pucks fast on the forecheck, making things happen offensively and in the second period quickly worked his way up to a third line role with Brandon Sutter and Matt Cooke as Brenden Morrow was demoted to the 4th line. Kennedy would stay in that spot for the rest of the game and figures to play there in Game 6.
Kennedy’s goal really sparked the Penguins and Douglas Murray scored a 1:22 later on a fluke goal from the point. It was the type of soft goal the Islanders have been plagued by all series from Nabokov whose play in the series has been very poor.
Leading 2-0, Sidney Crosby would then add his signature goal of the playoffs by taking a pass from Jarome Iginla in the neutral zone and splitting the Islanders D (Thomas Hickey, Lubomir Visnovsky) for a highlight reel goal at 14:00 of the second period to push the Penguins lead to 3-0. The goal showcased Crosby’s lower body strength as Hickey just bounced off Crosby who blew by the Islanders d-man.
Just prior to the goal, Tomas Vokoun made a huge save on John Tavares who stick handled through Paul Martin and Vokoun was a huge difference maker in the win.
Early on Vokoun was a little shaky with his rebound control but the Penguins were much improved in clearing pucks in front of the net and Vokoun seemed to really go into a zone in the second period where he made a number of key stops.
Vokoun made the saves you should and some, and another area where Vokoun was much improved over Fleury tonight was on dump in’s where Vokoun controlled pucks behind the net consistently which makes a world of difference for defensemen.
Leading 3-0 in the third period, Kris Letang (2) would add a power play goal at 5:43 of the period, ending Evgeni Nabokov’s night who was pulled after making 23 saves on 27 shots. It marked the second time this series Nabokov has not been able to finish a game.
Game 6 is Saturday Night