Steelers Buzz: Wallace not shy about his interest in playing for New England or San Francisco 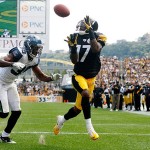 Pittsburgh Steelers wide receiver Mike Wallace hopes to remain with the Steelers but Wallace has intentions of listening to offers from other teams, if the two sides don’t strike a deal.
Appearing on SirusXM radio, Wallace was asked about the possibility of leaving Pittsburgh.
“My mind wonders from time to time but my heart is definitely in Pittsburgh.” That’s where I would like to be at but we all know that it’s a business and you have certain things that you have to handle. So if I go elsewhere, Pittsburgh will always be in my heart, but I have to do what I have to do.”
Wallace wasn’t shy about expressing his interest in possibly playing for the New England Patriots and San Francisco 49ers, two teams with a lot of cap space and widely linked to Wallace.
“Most definitely, ” Wallace told the hosts when asked if he would have interest in playing for the Patriots or 49ers. “Those are two playoff caliber teams, Super Bowl caliber teams and I think the right piece to those guys would put them over the top. So most definitely they’re Super Bowl contending teams. So I would most definitely, If I were to go anywhere else, that would definitely be two {teams}Â because this is a situation of them being contenders.”
“Most definitely” Wallace rambling about the 49ers and Patriots is agent Bus Cook at his best.
The Steelers, as we reported on Monday will be meeting with Cook at the scouting combine. Wallace admitted today that the two sides have had discussions. “We are talking but I don’t know how far they are going to get right now because of the situation,” Wallace said. “It’s just a situation that will have to play itself out. “I know that they are working hard trying to take care of it, but I don’tt know…. We`ll see.”
Wallace is said to be seeking top-5 receiver money and the Steelers prefer not to place the franchise tag on him, team sources said over the weekend. The team has until March 5th to do so and the cap hit for the franchise tag is expected to be $9.4 million.
If the two sides don’t reach a deal in time, the Steelers are fully expected to place a first round tender on Wallace.