Wednesday Practice Report: Kunitz back with Crosby and Guerin 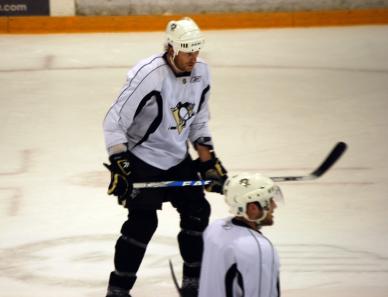 The Pittsburgh Penguins returned to the ice this morning after having an off-day on Tuesday.
There have been strong indications that Chris Kunitz will return to the lineup Saturday night against Montreal and today in practice he was back on the top line alongside Sidney Crosby and Bill Guerin.
Will Jordan Staal and Evgeni Malkin stay together for this weekends games? Based on practice
It is up in the air. During some line rushes early in practice, Staal and Malkin were together, with Pascal Dupuis on left wing.
However, when Max Talbot left the ice early, the two were broken up and Malkin centered Pascal Dupuis and Ruslan Fedotenko.
We’ll see how it plays out later in the week but head coach Dan Bylsma continues to insist that Staal and Malkin together is a short-term move.
Injury News
Jay McKee who was a late scratch after warmups Monday night was a full participant but did leave practice about 10 minutes before the other players. He is believed to be fine as trade speculation continues to mount.
Meanwhile, Max Talbot left the ice early and is still bothered by nagging groin injury. Pittsburgh is off for the next three days, but don’t bet on him playing Saturday night.
The Penguins announced late Wednesday night, that Thursday’s practice has been cancelled. The team will have an off-day.
Got in touch with a team rep tonight, who says the coaching staff wanted to give the players a day off. I’m still sure some trade speculation will be out there.