Will Beau Bennett be a healthy scratch for the fourth straight game? 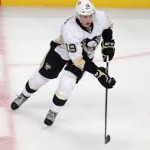 MORNING SKATE BUZZ
Beau Bennett is a player without a role in the top-9 and is likely to remain parked in the press box tonight when the Penguins faceoff against the surging Detroit Red Wings.
Bennett did not take any line rushes during Wednesday’s morning skate and with Blake Comeau expecting to play tonight, Bennett the Penguins 2010 first round pick projects to be healthy scratch for the fourth straight game and fifth time in six games.
Bennett while a strong possession player, is a perimeter player that has been deemed soft by some in the organization, including the coaching staff, and as one source put it, isn’t a Rick Tochett type of player due to Bennett’s constant struggles to be effective in tight checking games.
The problem the Penguins have moving forward is they want Bennett to be a player he isn’t, which has fueled trade speculation over the last week as Bennett’s name is certainly out there.
Bennett has 3 goals and 5 assists in 20 games this season.
When the season started, Penguins head coach Mike Johnston had visions of Bennett and Brandon Sutter anchoring a “scoring third line”. Now the Penguins are looking to build a third line around Nick Spaling, Brandon Sutter and find the right fit elsewhere.
Daniel Winnik remains among the third line targets.
PENGUINS LINES AT MORNING SKATE
Chris Kunitz – Sidney Crosby – David Perron
Blake Comeau – Evgeni Malkin – Patric Hornqvist
Nick Spaling – Brandon Sutter – Steve Downie
Zach Sill – Maxim Lapierre – Craig Adams
DEFENSEMEN
Paul Martin – Kris Letang
Rob Scuderi – Simon Despres
Derrick Pouliot – Robert Bortuzzo
GOALTENDER
Marc Andre Fleury will start in goal.