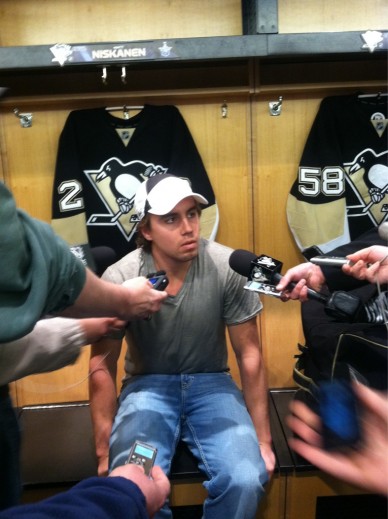 With the Penguins set to be over the salary cap, all eyes are on Matt Niskanen who is entering the final year of his contract and is an unrestricted free agent at seasons end.
Niskanen, 26, will make $2.5 million in 2013-2014, carrying a cap hit of $2.3 million.
The Penguins like Niskanen a lot and feel he’s a very good No. 5 type defenseman who can anchor a No. 3 pairing. Do they like him enough that they will first try to sign him to an extension this summer for a salary just north of $2.75 million per season?
It’s a rumor going around the past 48 hours in Penguins circles that sources say had been debated internally, and word coming out of the organization is that the Penguins intend to be very patient on getting under the cap before the start of the season. The percentages are better than 50/50 that Niskanen becomes the odd-man out but I do hear the Penguins feel they can get under the cap for the start of the season by keeping Niskanen on the roster and it’s something they might like to do.
Keeping Niskanen to start the season and putting Simon Despres ($840,000, two-way deal) down to the minors for the start of the season is one option I’m told the Penguins could consider but the Penguins would still be very tight cap wise to make the numbers work.
Moving Niskanen now, though, for future assets makes more and more sense.
When I started getting word early Thursday that Scuderi was looking like a legitimate possibility, I asked one executive what type of return the Penguins could get for Niskanen. With a weak UFA group for defensemen, he predicted a high draft pick and prospect.
Moving Niskanen would give the Penguins the option of taking the training wheels off Simon Despres and let him play a regular No. 3 pairing role with some No. 2 power play time. It would also open the door for a bigger role for Robert Bortuzzo and a third pairing of Simon Despres/Robert Bortuzzo or Deryk Engelland is a serviceable pair to start the season.
When looking at the long-term picture, moving Niskanen now also makes sense to acquire future assets and open the door for other young defensemen to get their feet wet at the NHL level.
Brian Dumoulin, acquired in the Jordan Staal trade last summer, is on the cusp of being NHL ready, team officials say, and the Penguins feel he could see some NHL action this season.
2009 second round pick Philip Samuelsson took big steps in his second professional season and he’s reaching the point where some feel he could provide a depth role as a No. 7 type defenseman within the next year.
2011 second round pick Scott Harrington will join the organization this season and is the best defensive defenseman in the Penguins system. Harrington has a great hockey IQ and defensive instincts. His coaches in London strongly believe he could see NHL time this season, though, the Penguins feel he’s a year away.
If Shero has his eye on opening spots for younger defensemen, moving Niskanen is a no brainer but I’m being told at this point you can’t rule out the Penguins getting creative and going into the season with Niskanen among their top-5 defensemen behind Paul Martin, Kris Letang, Brooks Orpik and Rob Scuderi.