Out of the Mix: Willie Desjardins left Pittsburgh late this morning without reaching an agreement 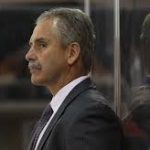 Top coaching candidate Willie Desjardins left Pittsburgh late this morning without reaching an agreement with the team to become their next head coach, an NHL source confirms.
Desjardins met with Penguins officials last night and again early this morning before talks broke off.
No talks are planned between the two sides and Desjardins is no longer considering the Penguins job. Desjardins who seeks a four year deal, is now expected to meet with the Vancouver Canucks on Friday night/Saturday morning.
Pittsburgh offered him a two year deal.
No coaching hire is imminent from the Penguins.
Desjardins had long been regarded as the front runner for the Canucks job.