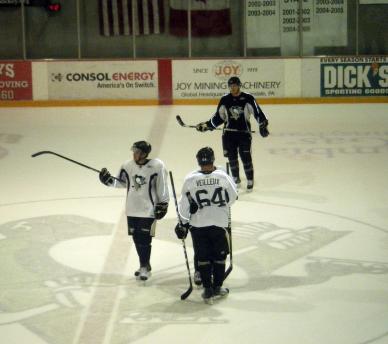 Day 1 of Penguins Prospect Camp is in the books as the Penguins prospects went through conditioning tests in the morning, met the media in the afternoon, and just concluded their first skating session.
The players went through an hour on-ice session this afternoon in what was their first of what will be four skating sessions this week.
Twenty five of the twenty six prospects invited to the camp skated this afternoon as Joey Haddad (Cape Brenton (QMJHL) was the only prospect who did not skate.
The players went through an up-tempo practice with a strong emphasis on the players moving their feet at all times.
The session started out with skilled drills to warm up the goalies and then went into drills 3-on-0’s, 5-on-5/fore-check drills.
2007 4th round pick Luca Caputi was very effective on the fore-check but for the most part had a first day of mixed results.
Among the top performers during 5-on-5/fore-check drills was Nathan Moon (2008 4th round pick), Dustin Jeffrey (2007, 6th round pick) Nick Johnson (2004, 3rd round pick) and Kevin Veilleux (2007, 2nd round pick)
Following the 5-on-5 drills, the players went through one-on-one drills.
Nick Johnson was among the standout players in the one-on-one drills using his size, speed to beat defenders wide.
Brian Strait struggled for the most part getting beat wide by Eric Tangradi (2007, 2nd round pick) and Nick Peterson (2009, 4th round pick) to open the drills 0-for-2.
A shootout ended the session as it went four rounds.
Kevin Veilleux, Nick Johnson, Robert Bortuzzo, Zack Sill, Carl Sneep, Nathan Longpre, Alex Velischek, all advanced to the second round and Kevin Veilleux and Nick Johnson were the final two as each player scored three times.
Veilleux won the shootout beating goaltender Patrick Killeen 5-hole in the 4th round, notching his 4th goal of the shootout.
* The Players will be attending the Pirates game tonight and will return to the ice tomorrow afternoon.
More Day 1 Reports
Day 1 reports on Caputi, CPZ, Hanowski
Defenseman Robert Bortuzzo has strong first day
Day 1 report on Eric Tangradi
Nick Johnson among top performers on day 1
Scouting Reports: Day 1 Defensemen