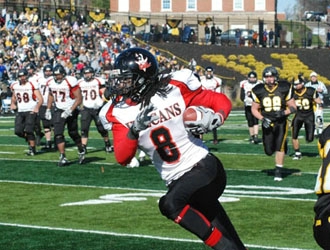 NFL scouts are not only focusing on Division-I prospects at pro days but there are a handful of Division-II prospects who are garnering draft interest from scouts.
Two of the nations top Division-II NFL ready prospects come from California University of Pennsylvania.
California (pa) cornerback Terrence Johnson is one of those small school prospects drawing interest around the league. Johnson participated in Duquesne’s pro day this week and according to Kevin Weidl of Scouts Inc, Johnson impressed the 10 scouts in attendance.
Weidl reports, “California (Pa.) CB Terrence Johnson took advantage of many scouts being in town, working out at 7:30 a.m. at Duquesne’s pro day and impressing the 10 teams in attendance. Johnson (5-9¼, 190) flipped his hips well, was good changing directions and displayed excellent balance. His 40 times (4.49, 4.50) were not overly impressive but we liked his body control when tracking and playing the ball and he showed good burst out of his breaks.”
“Johnson is not as highly rated as fellow small-school prospect Akwasi Owusu-Ansah of Indiana (Pa.), but his special teams value combined with the burst, toughness and ball skills to contribute in the nickel package give him potential value as a late-rounder.”
Cornerback Akwasi Owusu-Ansah of Indiana (Pa.) is regarded as the top Division-II prospect in the nation and a potential 4th round selection.
Johnson has a scheduled visit with the Baltimore Ravens, according to a Cal U Football source.
Meanwhile, among the most intriguing Division-II prospects in the nation is California University of Pennsylvania wide receiver A.J. Jackson (Height: 6-6, Weight: 235) of Lehigh Acres, Fla.
Jackson had 101 receptions for 1424 yards and 18 touchdowns in a phenomenal senior season at California.
Jackson is JUCO transfer from Sequoia JC where he was a JUCO Player of the Year in 2007 and two-time All-PSAC player in 2008 and 2009.
Jackson has all the physical tools that NFL scouts rave about and is getting plenty of early interest.
According to an university source, the Carolina Panthers and Miami Dolphins have expressed interest in Jackson.
California will hold their pro day on March 31st and a number of NFL teams will be in attendance.
Terrence Johnson, Edinboro quarterback Trevor Harris and A.J. Jackson will be among the key NFL prospects participating.