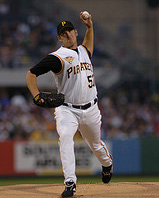 Pirates improve to 3-2 on the season
Aki Iwamura (1) and Jeff Clement (1) each homered off Arizona Diamondbacks ace Dan Haren and Pirates starter Zach Duke (2-0) pitched 7 strong innings, surrendering 4 hits and 2 earned runs, leading the Pirates to a 6-3 victory Saturday night to end a two game losing.
Duke only had two strikeouts on the night but pitched a Zach Duke type of game, getting the Diamondbacks to hit into groundouts and pop outs.
Duke an All-Star in 2009, has opened up the season with a 2-0 record and for the time being has put his struggles from spring training and the second half of last season behind him.
“He got balls on the ground, was consistent, changed speed,” Pirates manager John Russell said. “That’s what Zach’s capable of doing, and he pitched a really good game.”
Against a fastball hitting team, Duke was impressive with his off-speed pitches. Duke has won consecutive games for the first time since May 17, 2009.
Russell who was looking to jumpstart the Pirates offensively, reshaped his batting order, moving Lastings Milledge into the No. 3 spot and batting Garrett Jones cleanup.
Milledge went 1-for-5 with an RBI but Jones and Ryan Doumit who slid to No. 5 in the lineup, were a combined 0-for-8.
It was leadoff man Aki Iwamura and the Pirates bottom of their order that jumpstarted their bats.
Clement (1-for-3, 1HR, 1run, 1RBI), Andy LaRoche (2-for-4, 1 run) and No. 9 hitter Ronny Cedeno (2-for-4, 1RBI, 1run) combined for 5 hits and 2 RBI’s.
Cedeno continues his hot start and leads all Pirates starters with a .375 average.
The Pirates 2-5 hitters went a combined 2-for-18, including a 1-for-5 night for Andrew McCutchen. McCutchen has 1 hit in his last three games and is batting .227 on the season.
Iwamura who has added some flair to the Pirates clubhouse, was 2-for-4 with a home run, 2 RBI’s and 2 runs scored.