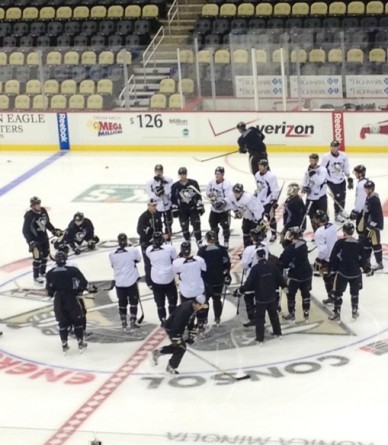 GAME 1 MORNING SKATE BUZZ
Sidney Crosby and Brooks Orpik are both participating in the morning skate but unless the coaching staff is trying to disguise their status, it appears that neither will play tonight in Game 1.
Crosby again this morning is an extra on line rushes, skating on a spare line with Dustin Jeffrey and Tyler Kennedy. Indications are Crosby’s return remains very close, though.
Orpik who is believed to be dealing with groin injury, is clearly not 100% and struggling to skate with any power. Orpik did not take part in any line rushes but is getting some work on the penalty kill. It’s hard to imagine Brooks Orpik missing a playoff game, but he would really be pushing it to try to play tonight.
Meanwhile, it looks like Beau Bennett will in fact play over Tyler Kennedy tonight, which would be the right move but a surprise one.
LINES
Kunitz – Malkin – Neal
Dupuis – Jokinen – Iginla
Morrow – Sutter – Cooke
Glass – Adams – Bennett
Extra: Jeffrey – Crosby – Kennedy
DEFENSEMEN
Martin – Engelland
Eaton – Letang
Murray – Niskanen
Extra: Despres – Bortuzzo.