Game 3: Guerin out for tonight’s game 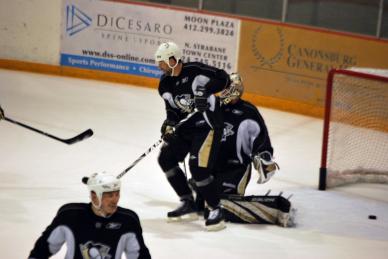 Pre-game skate update: 6:40 p.m. – Pittsburgh Penguins forward Billy Guerin has been ruled out for tonight’s game and will not play due to a sore back. Guerin did not participate in warmups.
Chris Conner who did not participate in the Penguins morning skate, is among the 13 forwards on the ice for warmups. Conner though will not play as Mark Letestu will make his playoff debut.
Penguins lineup
Kunitz – Crosby – Dupuis
Ponikarovsky -Malkin – Talbot
Cooke – Letestu – Kennedy
Rupp – Adams – Fedotenko
Defensemen
Orpik – Gonchar
Eaton – Letang
Leopold – Goligoski
From the Earlier
*The Montreal Canadiens return home for games 3 and 4 and will be be back in front of 21,273  at the Bell Centre in what will likely be a hostile atmosphere for Pittsburgh. The Canadiens are a confident team heading back home and believe the strategy that worked against Washington is working against Pittsburgh.
*The Canadiens are looking to take a surprising 2-1 lead over the defending Stanley Cup champions.
Montreal remains short-handed on their backend as Andrei Markov will miss his second straight game and Jaroslav Spacek has not been cleared to return.
*The Canadiens will make a lineup change up front as Glen Metropolit will return to the lineup and center Andrei Kostitsyn and Mathieu Darche on the fourth line.
Penguins Pre-game Update
*Veteran Billy Guerin did not participate in the Penguins morning skate but is expected to play. Guerin was given the morning off and is a game time decision. Guerin though is bothered by a sore back, according to a team source.
*Defenseman Jordan Leopold is feeling no post- concussion symptoms after appearing in his first game of the series on Sunday. Jay Mckee will sit for the second straight game.
*Center Mark Letestu is believed to be under consideration to replace Ruslan Fedotenko in the lineup according to team sources,  but according to a source on the scene, Bylsma made it sound like that Letestu will only play if Guerin were to sit. However, Bylsma has actively tried to hide his lineup during the playoffs.
*Looking to jumpstart Evgeni Malkin’s line, Pascal Dupuis and Max Talbot are expected to see time on Malkin’s right wing.
*If Guerin’s back were to flare up prior to game time and keep him out of the lineup, Pascal Dupuis will move up to the first line alongside Sidney Crosby and Chris Kunitz.
*Lines in morning skate: 1st line: 14 – 87 – 9; 2nd line: 23 – 71 – 25;  3rd line: 24 – 38 – 48; 4th line: 17 – 27 – 26;
*Only 13 forwards including Eric Godard participated in the Penguins skate. Letestu is the only WBS callup under consideration to play. Chris Conner traveled with the team but did not participate in morning skate. He is not under any consideration to play.
*The big news for Pittsburgh was Jordan Staal skating in sweats prior to the Penguins morning skate. With the injury not to his Achilles which was first speculated and reported, doctors believe in time that Staal could play through the injury with pain.
Canadiens Official Lineup
Cammalleri – Plekanec – Moen
Pouliot – Gomez – Gionta
Pyatt – Moore – Lapierre
Darche – Metropolit – A. Kostitsyn
Defensemen
Hamrlik – Subban
Gill – Gorges
Bergeron – O’Byrne
Jaroslav Halak will start in goal
Will update Penguins lineup closer to game time