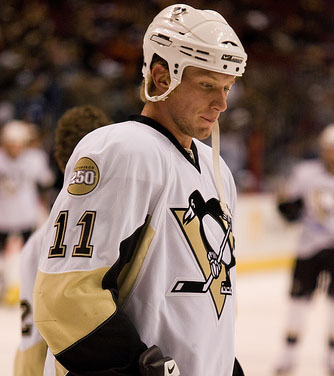 Game 4: Morning skate buzz
Updated: 12:50 p.m. – Dan Bylsma has called Jordan Staal a game time decision for tonight. Staal skated on the 5th line in the morning skate, an indication he likely won’t play but did take reps with the second power play unit. Bylsma’s use of Staal has prompted mixed signals on his availability for tonight but the fourth year center has progressed tremendously since Tuesday morning skate and is clearly close to returning.
While there are still some doubts that Staal will play tonight, he appears to be a good bet to return Saturday night for game 5.
Meanwhile, Bill Guerin will not play due to an elbow injury. Guerin will miss his second consecutive game.
Projected Lineup
Kunitz – Crosby – Dupuis
Ponikarovsky – Malkin – Talbot
Cooke – Letestu – Kennedy
Rupp – Adams – Fedotneko
*Jordan Staal game time decision
Defensemen
Orpik – Gonchar
Eaton – Letang
Leopold – Goligoski
Updated: 12:15 p.m. – For the second straight morning skate, the Penguins spent a good portion of the skate working on their power play. To the surprise of many, Jordan Staal worked with the second power play unit, a sign that he has not been ruled out for tonight.
1st power play unit: Kunitz – Crosby – Malkin
Letang – Gonchar
2nd power play unit: Ponikarovsky – Cooke – Staal
Leopold – Goligoski
11:55 a.m. – According to a source on the scene, Bill Guerin (elbow) participated in today’s morning skate but he did not begin the skate on his normal first line. Guerin though was slowly worked in the top-4 and took a shift here and there with the 1st line but for the most part was among the extra forwards. An indication that he won’t play.
Guerin though looked sharp in the skate per the source.
Jordan Staal is skating for the third straight day and continues to progress for a return to game action within the next week. In what is remarkable, a return for this series has not been ruled out and there’s even talk this morning that Staal will play Saturday night when the Penguins return home for game 5.
Lines in skate
1st: Kunitz – Crosby – Dupuis/ Guerin
2nd: Ponikarovsky – Malkin – Talbot
3rd: Cooke – Letestu – Kennedy
4th: Rupp – Adams – Fedotenko
5th: Conner – Staal – Guerin/Godard