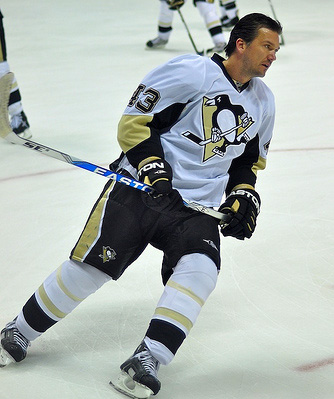 Morning Skate
The Penguins just concluded their morning skate and as we mentioned yesterday Kris Letang may be a healthy scratch tonight.
My source on the scene tells me the way it looks at the morning skate, it is a possibility.
Philippe Boucher worked with the first power play unit, replacing Kris Letang at the left point.
All indications are the Penguins will dress 12 forwards.
The Lines at the skate were
Kunitz – Crosby – Guerin
Fedotenko – Malkin – Talbot
Cooke – Staal – Kennedy
Dupuis – Adams – Satan
*updated: 12:00 p.m. The Detroit Red Wings took the ice at 11:30 a.m. and there was no sign of Pavel Datsyuk. Thirty minutes later, Datsyuk has joined his teammates and is currently on the ice.
Despite participating in today’s skate, Datsyuk is not healthy enough to play.

Penguins News and Notes from Today’s skate
*Dan Bylsma spoke to the media after the skate and establishing a presence in
front of the net is an area of concern for the Penguins. Bylsma made a few comments that the Penguins must get traffic in front of Osgood.

* Despite speculation that Bylsma would consider making a surprise change and consider inserting Petr Sykora into the lineup, that will not be the case tonight.
Sykora took his usual reps with Mike Zigomanis and Eric Godard.

*** The media was not happy that Sidney Crosby did not speak to reporters yesterday. I don’t see it as a big deal but the national and the Pittsburgh media are making a big deal out of it.