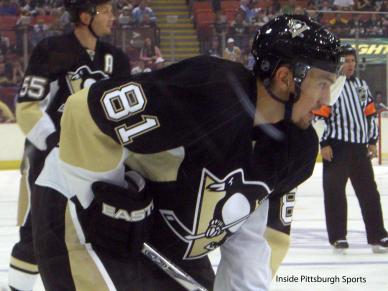 The Pittsburgh Penguins just took the ice about 30 minutes ago as the team prepares for game 7 of the Stanley Cup Finals.
The anticipation is sky high in the locker room and Pittsburgh is a confident team right now.
The Penguins started out the skate going through some flow drills and then went into their normal power play one and power play two rotations.
Dan Bylsma will not go with seven defensemen and will dress 12 forwards tonight, sources tell Inside Pittsburgh Sports.
Miroslav Satan will be back in the lineup and will replace Petr Sykora. Satan skated with the 4th line and with the second power play during the morning skate
Petr Sykora who is believed to have a small fracture in his foot was not on the ice.
Tonight’s Lineup
Kunitz – Crosby – Guerin
Fedotenko – Malkin – Talbot
Cooke – Staal – Kennedy
Dupuis – Adams – Satan
Defensemen
Orpik – Gonchar
Eaton – Letang
Gill – Scuderi
Goaltender: Marc Andre Fleury