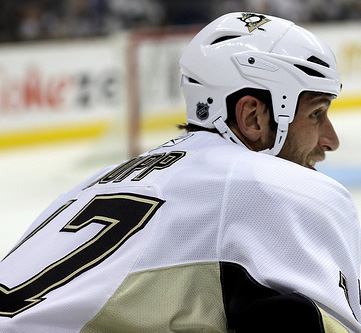 Post-Game Wrap Up: Latest Penguins Buzz
Pittsburgh Penguins head coach Dan Bylsma had the look of a frustrated coach after tonight’s game as the Penguins have lost 7 of 9 games.
Despite a good effort from his hockey team in Thursday’s 7-4 loss, Bylsma mentioned the lack of focus, and attention to details is playing a factor in lapses during the course of a game.
Pittsburgh showed glimpses tonight of the kind of hockey Bylsma wants from his hockey team, but again, the inability to play a 60 minute game is why they have dropped 7 of 9 games.
Pittsburgh now hits the road for what has the look of being a very tough five game road trip.
Special Teams Woes
Special Teams have been at the forefront of the Penguins woes of late and tonight was no different. The Flyers went 2-for-2 on the power play, while Pittsburgh was 0-for-3 on the night.
Despite the top end talent on the Penguins roster, there have been power play issues for a year in a half now. It’s a problem that won’t go away overnight.
The Penguins scheme remains a problem and they continue to lack a net presence type of player like a Ryan Malone.
A source tells me managements’ top priority as the trade deadline approaches……
is finding a top-6 rental winger who can not only play with Evgeni Malkin but also be a player who can contribute on the power play.
A reason Pittsburgh is highly interested in Toronto Maple Leafs 6ft 4 220 lb winger Alexei Ponikarovsky (15 goals, 4 power play goals).
The team is hopeful that Luca Caputi can provide that net presence in the time being, while the coaching staff doesn’t like Michael Rupp’s ability to get to pucks in the corner, which is why he has not received a strong look on the power play.
Sidney Crosby (8 PPG), Bill Guerin (8 ppg), and Evgeni Malkin (6 ppg) have combined for 22 power play goals while Jordan Staal (0 ppg), Matt Cooke (0 ppg) and Chris Kunit (1 ppg) have combined for 1 power play. All three players can be regarded as net presence players on the power play.