Where are Things Headed Between the Penguins, Letang? 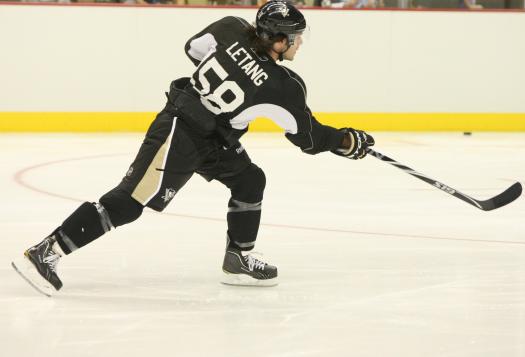 As stated here for months, Penguins General Manager Jim Rutherford has three untouchables on his roster:

There are some others who are 100% going nowhere this off-season and pretty much unavailable like Brian Dumoulin who Penguin coaches regard as the clubs best defenseman, Jake Guentzel is another one who is tremendous value for one more season on an entry level contract and of course Patric Hornqvist who begins a new 5 year contract next season.

For others like Phil Kessel and Kris Letang, vital members of the team, the Penguins are wide open for business on them.

Basically where things stand for both is the Penguins are fine with keeping them and fine with trading one or both.

Rival General Managers have been fully aware in discussions with the Penguins that the team will listen hard on Letang this summer.

Some of the local media who for whatever reason think Letang is an untouchable, is finally coming around to the idea that Letang is and will be in play.

Meanwhile, Jim Rutherford is already setting the table for Letang to possibly be moved this summer or at least set the stage for Letang’s name being out there in trade talks leading into the draft.

Rutherford to Josh Yohe of the Athletic:

“He’s [Kris Letang] not a guy that I’m actively trying to trade from our team. He’s been a great player for a long time and I think he’ll continue to be so. But, I can’t sit here and project an offer that some team could come along and make. I can’t project the future.” — Jim Rutherford to the Athletic.

There will be interest in Letang this summer, the Penguins are certain of that, the team, though, just isn’t sure at this point what type of offers/trade scenarios will be made.

As one source close to the situation says, “it comes down to the medicals” and how comfortable teams are with Letang on whether a legitimate Letang trade market emerges.

The Penguins have a ‘want’ and ‘will’ to find out.

Where the Letang Trade Market Could Develop:

When the Penguins floated Letang’s name out there to clubs in mid-December, two teams in particular that executives pointed to was Detroit and Buffalo.

Nothing has changed since then.

The Red Wings have coveted a top-flight defenseman for years and they’re not getting one in free agency.

Letang’s a tremendous fit to upgrade their transition game and Detroit is loaded with draft picks, Two-first Round Picks, Two-Second Round Picks, and Three-Third Round Picks in the 2018 draft.

Does Gustav Nyquist, 2018 1st Round Pick (Vegas) & a Third Round Pick get the Penguins attention, where Pittsburgh saves almost $3 million in space and adds a much better version of Carl Hagelin to bolster the second-line winger situation?

Remains to be seen but Detroit will surely kick some tires……..

Buffalo has stood out to many because of the Jason Botterill connection and Buffalo’s huge need of a puck-moving No. 1 pairing defenseman. Botterill badly wants to change the culture and adding a great character guy and winner like Letang makes all of the sense in the world for Buffalo

The Sabres are a trade scenario for the Penguins to unload the Letang cap hit but a trade fit from the Penguins end is still sketchy to get enough assets in return that makes Letang trading worthwhile.

Buffalo’s obviously not putting the No. 1 overall pick in play for Letang and their top-pick in 2019 would surely be off limits most contend.

Botterill is shopping forward Ryan O’Reilly hard this summer, a player the Penguins looked into aggrssively to acquire in the summer they ended up trading for Phil Kessel, but O’Reilly’s got a lot of term (5 years, $7.5 million Cap Hit) that should be a non-starter when the goal of moving Letang would be opening up some cap space.

If you’re trying to swap out Phil Kessel for a player like O’Reilly (can also play wing) who plays a completely different type of game than Kessel, strengthened on a 200 ft game, then maybe it’s something that makes sense for Pittsburgh to think about (Buffalo is not one of the 8 teams on Kessel’s trade list), especially with the coaching staff pushing for more 200 ft players.

But, relating to Letang trade scenarios that may emerge, moving Letang’s contract for 5 years of O’Reilly’s remaining contract does nothing for the cap to open up things for the Penguins and still leaves a major hole on the blueline with no additional cap space to address.

Penguin coaches would be a fan of Marco Scandella To read this insider news, subscribe to get “Inside Access”!

That said if the Penguins get strong enough intel they’re indeed a serious suitor for John Tavares, then Buffalo starts looking little better as a spot to move Letang and a salary, Conor Sheary for example, tied to the deal.

Surveying a potential Letang trade market, it won’t surprise rival executives if Edmonton takes a look but two teams some buzz is generating around as likely suitors are the Florida Panthers and Arizona Coyotes.

Letang as the No. 2 right D behind Aaron Ekblad would be a great spot for him and have quite the making of two top-D pairs for the Panthers.

If a GM’s philosophy is “defense wins championships ” LeFuckup is the last guy you want on the roster ….

Lol you don’t understand what he said do you? First of he said if specific to the scenario… second is he saying Letang don’t fit that

Good one D. And letang will waive off his NTC to play for non contender teams.

I have inside sources that say some teams will be in the hunt for certain players depending who is willing to make deals before, at or after the draft. It all depends on who is willing to part with what and vice versa. Stay tuned.

Wow, talk about speculation. Good one D. Crazy to suggest Murray is off limits. Pens would move him if they thought there was a better option, which there may not be.

Holy s*** an offer of Nyquist, a late 1st, and a nothing pick is a brutal offer for Letang. We can complain all we want about Letang but he is worth a lot more than that.

This entire article is BS except for the fact that JR is willing to listen to offers.

Honestly, this offer isn’t too bad for a $7 million dollar defense. Especially one who can’t or wont play defense, wont shoot from the point on the power play,and is a fragile as a potatoe chip. Quite frankly HE makes poor decisions all over the ice…its time…He has been good for along time but he has slipped a ton. Letang at $7 million if we can clear some cap room move him

Do not insult potato chips!

I can’t see Letang waiving his NTC & modified NMC for an Underperforming team like Buffalo or Arizona, what’s in it for him? I’m sure he wants someone who will at least contend… outside of that maybe the Habs since he’s from the area, lives, & still trains there. That I could see. Another point on the plan B for these teams gunning for Erik Karlsson, Letang is a great plan B for those teams as well, nearly identical in style of play, TOI & injuries, but has his name on the Cup & with what will become a MUCH… Read more »

Karlsson is still under contract, unless he decides he’s done with Melnyk it’s likely he isn’t an actual option either.