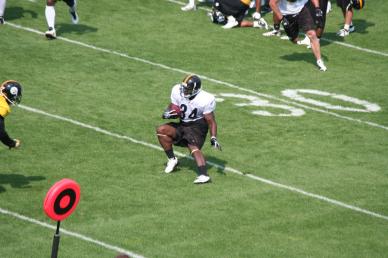 Friday Practice Report: Parker or Mendenhall?
The buzz surrounding the South Side facility again today is questions about who will start at running back against Cleveland.
Running back Willie Parker took all of the first team reps in practice on Thursday but that was because Rashard Mendenhall missed practice due to an illness.
Today Mendenhall was back at practice working with the first team. An official decision won’t be made on who starts by the coaching staff until tomorrow at the earliest but Mendenhall is ready to go and indications are Mendenhall will start.
Sweed in, McDonald out?
*Shaun McDonald ran with the scout team today in practice. It appears the Steelers are leaning towards playing Sweed over McDonald for the second straight week. But, just because Sweed was the number 4 receiver in practice doesn’t mean he will play against Cleveland.
Injury Report
Troy Polamalu, Trai Essex, Andre Frazier and Travis Kirschke are listed as probable and will play. Polamalu will be limited at times.