Morning Pens Buzz: Is the 4-6 weeks timetable an optimistic view for Martin after hand surgery? 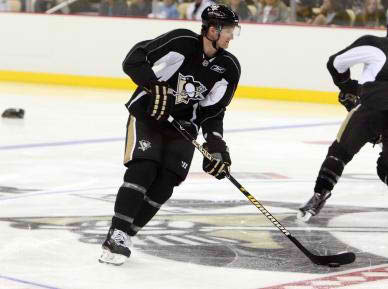 MORNING PENS BUZZ
The Penguins revealed on Tuesday that defenseman Paul Martin would be out 4 to 6 weeks due to a broken hand and after further review, it was decided that Martin should have surgery.
Penguins head coach Dan Bylsma said Friday that Martin had hand surgery on Thursday but the timetable for return is roughly the same.
“Upon further review by the doctors, it was decided that surgery on Paul Martin’s hand would be a better avenue for recovery and a quicker recovery,” Bylsma said after Friday’s practice at Soldier Field. “It’s roughly the same time frame,”
We’ll see about that.
While everybody is different and Martin is not believed to have a real complicated hand injury like Beau Bennett for instance, but in most cases you don’t see NHL players returning for close to 8 weeks or so after surgery for a broken hand.
It took Jordan Staal about nine weeks to return during the 2010-2011 season after having surgery on a broken hand he suffered in practice on Nov 1, 2010. The initial timetable for return was six weeks but Staal had some complications and did not return until January 1, 2011.
Chris Conner broke his hand this season on December 31st that required surgery and was given an initial timetable of six to eight weeks. Conner is in the ninth week of his injury and still a couple days away from being cleared to start practicing with the team. At the end of the day, it’s probably going to end up being a 10 week injury.
The Beau Bennett injury, while regarded as a complicated injury from the start, has gone from an 8 to 10 week timetable to now an injury that will sideline him for at least four months or longer. Bennett is in the 14th week of his injury and is going to be sidelined for three to four more weeks.
The NHL playoffs will begin in seven weeks (April 16-17). The four to six week timetable for Paul Martin will need to hold up for him to be ready for the playoffs or get a few regular season games in. If the injury ventures into the 8-10 week time period, then it’s going to be extremely troublesome for the Penguins.