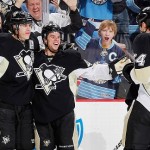 Transition game: The Penguins are a team that is built on creating offense through the neutral zone and they got to their game early last night, stretching the ice with quick puck movement in the transition game.
Improving in that area and attacking the Blackhawks with a quick transition game was a top priority going into last night’s game.
[instory]
“We think the neutral zone is a big key for our team and the way we play on both sides of the puck, ” head coach Dan Bylsma said prior to last night’s game. “Defensively and offensively itâs one of the factors for us being able to get to our game and allow us to play with speed. When weâre talking about improving there itâs a focus for our team. That is a real big factor for our team, ” Bylsma said.
Last night’s 3-2 win was the Penguins first win vs a top-10 team, since October 18. The team was 0-6 in their previous six games against teams currently in the top-10 (Florida, Detroit, Philadelphia, New York Rangers, Boston Bruins).
Big Guns Stepping Up: Evgeni Malkin (15G-24A-39Pts) has re-emerged as one of the premier players in the game and the Penguins big guns were huge last night with a three point night from Malkin, Neal netting his 19th goal of the season and Chris Kunitz collecting his 12th goal of the year.
Neal and Malkin both extended their points streak to six games and both have taken their games to another level since Sidney Crosby has been out of the lineup. Malkin (15 pts) and Neal (8pts) have combined for 11 goals and 12 assists in their last six games.
â{Geno} has been a force offensively,â Bylsma said. âHeâs also a guy that weâre counting on to play against other teamâs top lines right now. Heâs been good in both ends of the rink.” Malkin had a career high 16 faceoff wins in the victory, as Pittsburgh dominated in the faceoff circle. “He’s been powerful, making plays and driving the net. He’s going to have 10 scoring chances again tonight the way he’s dominating and the way he’s playing.”
Bylsma’s decision to put Kunitz and Neal on Malkin’s wing has created a ton of space for him. “He is definitely demanding of the puck right now, ” linemate Chris Kunitz said.
On December 13th, Malkin was 20th in the NHL in points. Now he’s tied for first.
Suspension for Engelland hit that was a turning point?: The NHL is reviewing Deryk Engelland’s hit to Marcus Kruger’s head where Engelland delivered a forearm to Krugers head. There was no penalty for hit. Kruger played the remainder of the period but didn’t play in he remaining two periods.
It was one of those hits where there wasn’t a clear intent but it is a hit where observers believe could garner a one to two game suspension. Head coach Dan Bylsma said afterwards that he didn’t have expectations that Engelland would face a suspension. Blackhawks head coach Joel Quenneville called it a tough hit but also a turning point in the game due to the Blackhawks retaliating.
“Tough hit,” Quenneville said. “High hit in a tough area… He was in a tough spot.”.

“To be short-handed on a play like that was tough,” Quenneville said. “They got a lot of momentum there. You could look at that as a critical point of the game.””(Scott) did the right thing.”
Scott earned praise from his Blackhawk teammates but the Penguins made Chicago pay as Evgeni Malkin found Chris Kunitz streaking through the neutral zone, getting behind the D for his 12th of the season.
The power play has been an area that the Penguins have showed improvement in since Crosby has been out of the lineup. Pittsburgh has scored a power play goal in five of six games, and are 8-for-28 during that span
Hawks feel they gave Pittsburgh two points: Chicago completely dominated play in the third period, outshooting Pittsburgh 19-4 and scoring twice but were unable to capitalize on the power play at the end of the game to force overtime. “We basically handed them two points,” forward Viktor Stalberg said afterwards
Tangradi Sent Down: Eric Tangradi was a healthy scratch last night and the writing was on the wall that he would be re-assigned this morning and that happened as the team announced the move minutes ago. Tangradi, 22, has played in four games with Pittsburgh this season, going scoreless while averaging 10:23 minutes per game. He ranks fourth on WBS with 20 points (10G-10A) in 24 games.