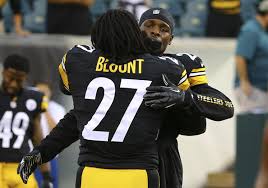 LeGarrette Blount being a good teammate was always going to be unlikely and his latest antics could send him out of town.
Ed Bouchette of the Post-Gazette reports Blount left the field before Monday night’s 27-24 win over the Titans due to being upset over his lack of playing time. Bouchette writes “He {Blount} dressed and left the locker room, apparently headed for the team bus that would take them to the airport. At least one player thought they should leave him in Nashville.”
No surprise here but Bouchette writes that “Blount has been an internal problem for at least a month” for the Steelers and the team feels he is dragging down Le’Veon Bell.
The two were busted for pot earlier this season.
Blount did not have a carry in Monday’s 27-24 win and missed an assignment on a block.
With the Steelers believing Blount is a bad influence on Bell, it’s possible they reach the point where they seriously consider releasing him this week with them on the bye or at the least a game suspension seems likely.
Bit of a different circumstance but the Steelers suspended Rashard Mendenhall for one game during the 2012 season for reasons of conduct detrimental to the team as Mendenhall skipped a game because he was going to be inactive.