NHL: Scuderi back by mid-to-late December? 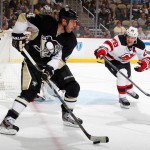 SCUDERI LATEST
Things are progressing well for defenseman Rob Scuderi who had surgery about three weeks ago on a broken ankle he suffered on October 26th.
Scuderi could begin skating in around two weeks and anticipates returning “several weeks” before the February Olympic break, an NHL source close to the situation told Inside Pittsburgh Sports.
The buzz in the organization is Scuderi has a 6-10 week injury and could return to the lineup as early as mid-December, though closer to the new year is a more likely scenario I’m told.