Off-Season Questions: With how things went vs Boston, Is there still mutual interest between the Penguins and Jarome Iginla? 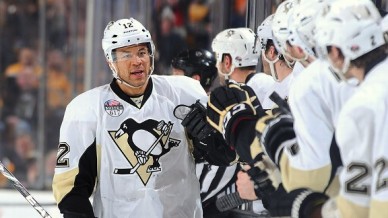 AVALANCHE, RANGERS, CANUCKS TO CHASE IGINLA?
Jarome Iginla was the first to admit that he wasn’t very good against the Boston Bruins. “I wasn’t very good in this series,” Iginla said. “These close games you want to find a way to contribute on that extra goal and stuff. It stinks not moving on. We had a good team with a good shot.”
After posting 12 points in 11 games through the first two rounds of the playoffs, Iginla was a total non-factor against the Bruins, winning few puck battles and unable to finish around the net. That said, Iginla was also badly misused by the coaching staff in the third round and at different points since becoming a Penguin.
Iginla had viewed Pittsburgh as a potential long-term fit, sources said in April, and Penguin management has believed Iginla has two to three more productive years in him as a top-6 winger and power play specialist. Suddenly, though, it remains to be seen if that mutual interest will still exist.
Iginla will never admit it, but he was never comfortable in the role Dan Bylsma put him in, moving a Future Hall-of-Famer to the left side and Iginla’s play in the third round will surely have the Penguins thinking twice of bringing Iginla on board for another two to three years at a likely price tag of $4 to $4.5 million per season.
If Iginla hits the open market, he won’t be short of suitors similar to Shane Doan last season and could command over $5 million per season. Iginla has long had interest in joining the Los Angeles and three teams already surfacing include the Colorado Avalanche, New York Rangers and Vancouver Canucks. There will be others.
Adrian Dater of the Denver Post on the Avalanche likely making an offer for Iginla:
“Could the Avs make an offer to Jarome Iginla? My opinion is…Yes, I think they might. The Avs could buy out the contract of David Jones and use the remaining cash to make a decent offer to Iginla. Although I don’t think they’d make a crazy offer. But the word I’m hearing is that Joe Sakic is intrigued with making Iginla an offer – and those two are good friends and former linemates on a Canadian gold medal Olympic team. Stay tuned.”