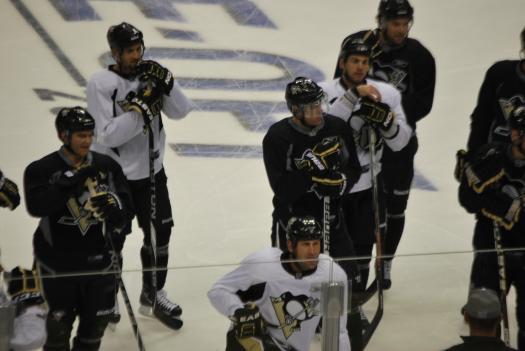 Lines
Kunitz – Crosby – Dupuis
Tangradi – Comrie – Malkin
Cooke – Talbot – Kennedy
Rupp – Letestu – Godard/Adams
D-Pairs
Martin – Letang
Goligoski – Lovejoy
Hutchinson – Engelland
Notes: No changes on the Penguins top-4 lines. Eric Godard took a regular shift with the 4th line as it remains to be seen if Craig Adams will sit for the third straight game.
Scratches: Defenseman Brooks Orpik will miss his 5th straight game. Orpik remains sidelined with a groin injury but is believed to be progressing. He skated in full gear before the Penguins took the ice at 10:30 a.m. Orpik could return to game action by the weekend.
Zbynek Michalek, Jordan Staal and Arron Asham also took part in individual workouts this morning. Asham may travel with the team this weekend. All four players will miss tonight’s game.
*Goaltender Brent Johnson received the 1st set reps with goaltending coach Gilles Meloche as the goaltenders work with Meloche for the first 5-to-10 minutes before the team goes into drills. The probable starting goaltender usually gets the bulk of reps with Meloche in the early minutes during morning skates.

All signs point to Brent Johnson starting in goal tonight as head coach Dan Bylsma failed to commit to goaltender Marc Andre Fleury during his media conference today. Also, during the morning skate, Johnson looked like a goaltender whose starting. Fleury also said after the skate that he doesn’t expect to play.
“We’ll go game time, ” Bylsma said when asked about whose starting in net.
“You know, you make a plan at the beginning of the year and beginning of every month you make a plan for the month, ” Bylsma said. Probably every month it gets adjusted. Sometimes its for different reasons, so we’re not far off the plan we set out for right. So, we’ll see how it keeps going this month.”

The Pens and Senators split their four-game series last regular season in strange fashion. Each team took home a 4-1 decision on home ice. Each team also scored a blowout win on their home ice.
The Senators trounced the Pens 6-2 at the home last November. A little over a month later, the Penguins dropped the Senators 8-2 at Mellon Arena.
The Pens outscored the Senators 15-13 in those four games.
The Penguins have also eliminated the Senators from postseason play in two of the last three postseasons (2008 ECQF, 4 games. 2010 ECQF, 6 games.)

The collectively held breath of Pittsburgh could be heard exhaling after the Penguins dropped the Flyers 5-1 Saturday and moved to 3-3-0 overall.
For the time being, the Penguins find themselves in a place they expected to be at the outset of the season, tied for first in the Atlantic. The Islanders also have six points.
With the win, the Pens moved to an important 3-1 in their first four games of division play.
The Pens can extend their streak to three games with a win over Ottawa. The Senators have only one win so far (1-3-1) and are tied with Buffalo for last in the Northeast Division (3 pts.)

The Pens won the Flyers game with a healthy offensive effort, the sort of trademark the Pens have carved out of the NHL landscape since the high-scoring teams of the early 90s.
With the win the Pens improved their goals for (3.0) and against (2.3) averages, both to ninth place overall. The power play also moved into thirteenth overall, though still only hitting at a 16.7 percent clip.
Sidney Crosby also hit his stride in hostile Philadelphia, landing two man-advantage goals and an assist to tie for the team leads in goals (3) and points (6).
Defensemen Alex Goligoski (3G, 3A) and Paul Martin (1G, 5A) tie Crosby for the team lead in points. Mark Letestu is second among forwards with three goals and two assists, picking up a point in five of six.
The Penguins blueliners lead the league in scoring from defense (19 points.)

This is the first time since the lockout the Penguins will hit the ice with Sergei Gonchar skating the opposition’s colors.
In five games with the Senators Gonchar has one assist and is a minus-two. He leads the Senators in average time on ice, 27:13 per game, nearly five full minutes more than Chris Phillips (22:18) who is second on the team.
Gonchar, 12th all-time amongst defensemen with 92 power play goals, has yet to help the Senators’ struggling man-advantage. The Senators are converting on only five percent of their PP chances, dead last in the NHL.
Ottawa’s offense is struggling on all fronts. Only Milan Michalek (3) and Mike Fisher (2) have more than one goal. As a unit, the Senators have collected only 10 goals in 5 games.
Michalek, the younger brother of Pens defenseman Zbynek, missed last spring’s playoff tilt with the Penguins. The winger came to Ottawa from San Jose as part of the Dany Heatley trade in 2009.

With Pascal Leclaire on the shelf again, the Penguins get Brian Elliott Monday.
The Penguins had success against the Senators goaltender last season, tagging him for a 4.14GAA – .850 SV% in four starts last postseason.
Elliott is 1-1-0 for Ottawa (3.21 – .903) in 2010-11.
For the Pens, Brent Johnson is the expected starter for Pittsburgh.
Johnson is responsible for all three of Pittsburgh’s wins this season – Marc-Andre Fleury for all three losses.
Johnson is carrying a 1.32 GAA (4th in NHL) and a staggering .953 save percentage (3rd in NHL) through his three starts. His three wins are also tied for second most in the league.
Conversely, Fleury carries a 3.41 GAA and .853 save percentage.

Staal, Asham, Orpik and Michalek remain shelved. Orpik is nearest to returning. His status is day-to-day (groin).
Oft-injured goalie Leclaire is out for the Senators with a groin injury that will likely keep him on the bench for a week or two. Defenseman Filip Kuba is out until November (broken leg).

The Pittsburgh Penguins will hold “Hockey Fights Cancer” Awareness Night Monday, Oct. 18, when the Pens take on the Ottawa Senators at 7 p.m. at CONSOL Energy Center. It is part of a month-long program to promote and raise money for the NHL’s “Hockey Fights Cancer” initiative. All fans in attendance will receive a white “Hockey Fights Cancer” t-shirt courtesy of UPMC Cancer Centers and the American Cancer Society. The Penguins encourage all fans who have been touched in any way by cancer to wear the t-shirt during the game to raise awareness for the cause.
The Pittsburgh Penguins will host several cancer survivors and their guests Monday night in partnership with UPMC Cancer Centers. One of the survivors will be featured during an in-game public service announcement with Penguins center Max Talbot and Dr. Stanley Marks, Medical Director for UPMC Cancer Centers. Sidney Crosby will also host six young cancer patients in his charity suite in conjunction with the Make-A-Wish Foundation of Greater Pittsburgh and Southern West Virginia.