Tonight showed why the Pittsburgh Penguins are back-to-back champions.

A quick turnaround from the debacle in Chicago was probably the best thing for this club and it was only Game 3 of 82, but what the Penguins did tonight was get emotion back in their game that was lacking Wednesday and Thursday night to open the season

A rematch of the Stanley Cup Final saw a physical and nasty game play out.

With a complete game performance in all three zones, the Penguins got outstanding play in goal from Matt Murray who shutout the Predators again, the third straight time with a 26-save performance, and there was one particular player that set the tone for a great response game from the Penguins.

It was Evgeni Malkin.

Malkin who netted the opening goal with a blistering slap shot just inside blueline, was a beast in the 4-0 shutout win.

His play away from the puck was phenomenal. He created a turnover at his own blueline that led to his goal and the determination to play a dominant 200 foot game was there all night.

An A+ game from Malkin in how he took this game over in all three zones. It doesn’t happen enough but when Malkin is focused like this and using his size to his advantage to impact a game in a number of areas, there are few better.

The Penguins transition defense in the first two games of the season in allowing 15 goals was a train wreck.

It wasn’t just on the defense.

Pittsburgh’s puck management off zone-entries was very poor vs the Blues and Blackhawks.

Tonight that was cleaned up and paved the way to Penguins having the Predators chase the game from the early minutes.

Malkin struck a 1:06 into the game and the lead up to the goal came off Malkin creating a turnover and off a zone entry where Phil Kessel shows great patience in waiting for a play to develop and finds Malkin for a booming one-timer.

Then Pittsburgh struck again at 10:57 of the first period on a rebound goal from Jake Guentzel driving to the net.

A key here again was patience off a zone-entry.

Rust enters the zone with a 3-on-3 situation and pulls up, finds a trailing Brian Dumoulin who gets the puck to the net and Pittsburgh with Rust, Crosby and Guentzel crashing to the net, get a goal from Guentzel.

Cleaning up the puck management game was critical to the Penguins’ big night.

Defensively, the Penguins also cleaned up some critical areas.

The commitment level to their own zone was at or near postseason levels.

Pittsburgh was excellent tonight with 5 players below the top of the circles. Unlike the first two games where the Penguins were constantly up the ice and more roaming around the d-zone, Pittsburgh also showed patience defensively in players staying in their lanes.

And when play broke down for a high danger chance against, the Penguins had a line of defense [hide] such as this play in the second period where Olli Maatta steps up with a blocked shot from the slot. 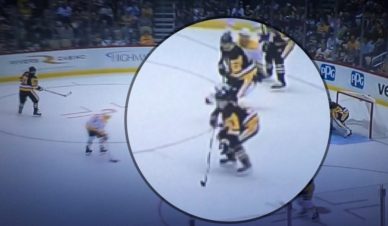 Nashville showed up to play tonight. If the Penguins from Matt Murray and the rest the team weren’t dialed in as they were, this could have been a clunker.

Very impressive response game from the Penguins and few should be surprised.

Ryan Reaves vs the Predators

“He was definitely a factor” — Sidney Crosby on Ryan Reaves

Sam woke up from his poutine coma.

How many goals did we need with Murray tonight, Sam the b1tch bandwagon?

Well I’m more interested in the fact that Murray earned the shut out after to botched that the Penguins should “traded him” instead of Fleury all day lol.

Love the commentary on how great Malkon was too… another guy you’ve wanted gone for nearly a decade.

Sheary makes 3.5 million… I’m fine if he goes the odd game or two without scoring. At least I know what fucken line he is on haha.

Wait… are you not also one of the dip shits who shits on Maatta regularly too? You really should be the last one talking on this subject… PS great game by your Habs tonight

Sam is a racist.