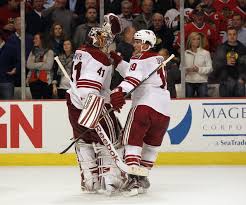 SMITH LIKELY OUT FOR COYOTES
The Pittsburgh Penguins are expected to avoid seeing Phoenix Coyotes goaltender Mike Smith tonight, who was making his 12th consecutive start last night vs the New York Rangers and suffered a right leg right that is believed to be serious.
The Coyotes who lead the final wildcard spot in the Western Conference by one point over the Dallas Stars, lost to the Rangers 4-3 in overtime last night.
Backup Thomas Griess (7-5-2, .924 sv%, 2.38 GAA) has played well this season with 2 shutouts and is 1-0 in one career stat vs the Penguins.
MEGNA BACK UP WITH THE PENGUINS
Jayson Megna has been recalled for tonight’s game. Joe Vitale remains out and there is talk that the coaching staff has soured on Taylor Pyatt, though, Megna’s recall is believed to just be for emergency purposes so a regular is likely to be injured. How long Megna stays up remains to be seen.
Beau Bennett finishes his three game conditioning assignment tonight and is expected to called up on Thursday.